The blizzard came and went and spoiled plans. Christmas was Christmassy, with all of us gathered at Ben’s parents house out in Sag Harbor, the usual happy blur of candles, presents, turkey, and wine. Our collective pack of dogs kept things interesting, all five of them running in and out of the house, alternately sparring with one another and storming the table. 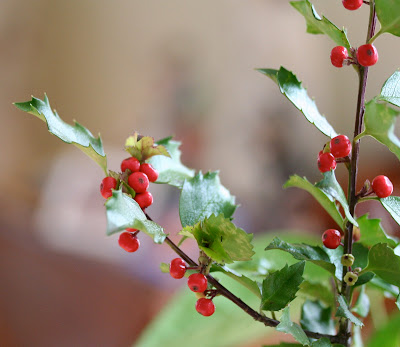 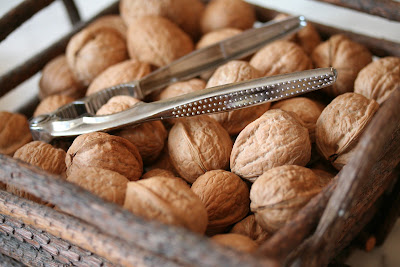 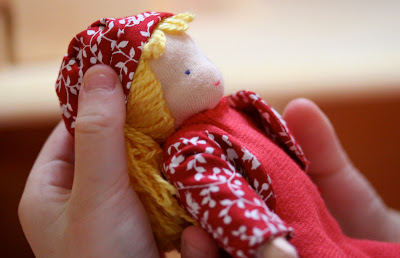 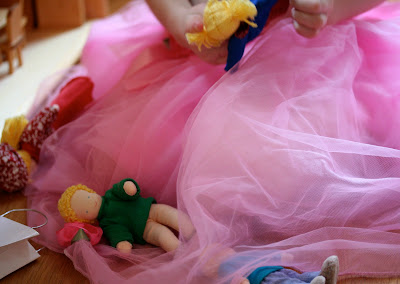 And the next morning, we awoke to a sweet garnish of flurries. Except those flurries began to thicken and whip about in earnest as the wind picked up, and when accumulation became a reality we thought to check the forecast–and the status of our flight to Denver the next day. By noon our flight and all others were nonexistent, with nothing else until the 30th. Nothing. Not even working airports, as it turned out. Our visions of gliding through powder in the Rockies vanished.
Down with an awful cold, I watched the blizzard beat against the window as the day wore on. I watched as Ben made the best of it, rallying the girls to roll a snowman out in the front yard, their heads bowed against the gales howling off the Long Island sound, giggles rising above it all as they poked in walnuts for eyes. From inside, the din from those winds crescendoed to a high whistling whine in the nighttime hours, as though we were holed up inside a medieval fortress. The snowstorm was shaping up to be the Grinch of Christmas 2010…except, like the Grinch, the snowstorm’s heart grew a few sizes and decided to give something back. Because the next day, when we returned–and oh, what a return–we got to experience New York at its New Yorkiest, New York in the hush and beauty and excitement of a big new snow. There’s really nothing like it. Except we relied too confidently on memories of past snowstorms and swift plowings, and we didn't quite realize there was twice as much snow where we were going than where we had been. Our neighborhood, buried under a 20-inch blanket of white, had become a maze of heaped streets and more than a handful of abandoned vehicles–including multiple ambulances and taxis wedged sideways in the middle of major throughways. 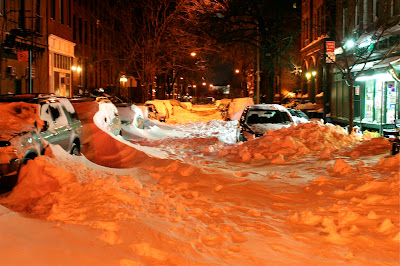 We drove around searching in vain for clear passages, feeling the fools for motoring at all, especially in a car lacking four wheel drive. People were using main streets as sidewalks, as cross-country ski trails, as snowshoe paths; they were the wise ones. Eventually we did find a way to our front door, barreling the wrong direction up our one-way street, which was blocked at the other end by a stranded van. Then, just as we squeezed ourselves out of the car, our friends Lauren and Jon happened along and sprang into action, helping us unload all our luggage and loot while their son distracted our daughters from their catfight of the moment. We didn’t even have to ask–they were just there. That’s our neighborhood for you.
Later, the car safe in a garage (street parking is not happening for anyone, for a while), we went out into the deserted streets, feeling like pioneers in a new landscape. In the yellowy light we walked up Henry, past a paralyzed taxi, past the school, past ghostly Christmas decorations and twinkling strings of lights. The unmanned vehicles, buttressed by wind-chiseled drifts, created a sense of suspended animation that could have been an elaborate art installation. Our daughters dove into the best playscape ever: snow heaps to scale and slide, pristine drifts to destroy, smooth planes offering the perfect canvases for snow angels. My four-year-old reclined blissfully into the banks, experiencing the sensation of simultaneous floating and sinking.  On Amity, an ambulance that had been left for dead attempted to extricate itself from a headlock with a parked SUV, in the process grinding headlights and crunching metal. Further up, a van spun its wheels until some guys with Vermont plates offered to push it out of its rut with their own car.
We tumbled gratefully into our good Japanese restaurant up the street, peeling off layers of ski gear and absorbing the indoor heat, ordering miso soup and hot edamame. Then came eel and yellowtail for the grownups, avocado and cucumber rolls and sticky rice for the little ones. We nearly had the place to ourselves, the moody globe lamps and cheery Japanese waitresses and French chanteuses on the stereo. Chopsticks for all, the children's rigged with beginner hinges. And for dessert: green tea ice cream four ways and cups of roasted barley tea, then back on with the gear and back out into the streets, where the occasional drama of dig-outs continued. And as we fell asleep, our windows admitted that unique glow that happens when millions of icy crystals refract the street lights into our rooms.

What did we miss? Good skiing, Fat Tire, time with my family and with friends I only see out there these days. Colorado and is another home to me. It's where I spent my Christmases ages 14 through 26. But New York truly is home now, in the realest sense, and it took a massive snowstorm to remind me of that. A snowstorm that recalled some of my earliest winter days in the City, during the honeymoon phase, when I was initiated into that sense of benign anarchy only a New York snowstorm can create (we all know, in the end, that the able army of plows will save us, so we enjoy it while we can). It's also when you come face to face with your neighbors, who are grumbling but secretly cheerful as they shovel their sidewalks in their bomber hats. We're all in it together. 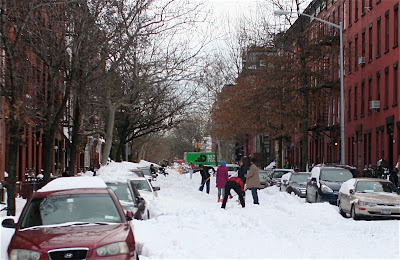 The next morning, the spell was broken as more roads got cleared and people took matters in their own hands, digging out portions of streets themselves and carving parking spaces along the sides. Cars moved through. Salt uncovered more of the sidewalks and the less-white blanket began to reveal just how filthy the city really is: soot, garbage, dog pee, and grease streaking from restaurants' back doors stained it as the day went on. Out of the melting piles hidden bikes will emerge and lost mittens will materialize. In our house the cautionary towels and piles of soggy boots will remain by the front door for a while, and hearty, sustaining fare will simmer away on our stove well into March. We will be more carnivorous than in warmer months.

Yesterday, I hadn't made it to the store since our return, and as it happened I didn't need to: in October I had picked up gorgeous, grass-fed beef shanks from Grazin' Angus Acres, at the tiny but excellent Carroll Street greenmarket. They awaited in the freezer for just such an occasion as being snowbound, and I had the other necessary components as well: root vegetables from our CSA, frozen homemade stocks, frozen tomato puree from our winter CSA, and a splash of leftover wine. I even managed to uncover some chilly but fragrant rosemary from our herb "garden." 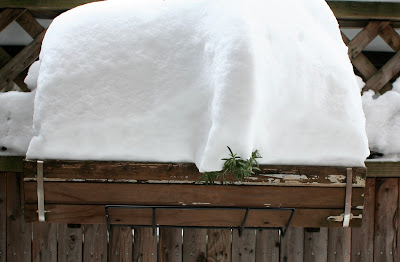 What resulted could barely be called an osso buco, as that traditional Milanese dish is made from veal. Even though I know of sources for humanely-raised veal, I still can't bring myself to eat it (and although we eat more meat in winter, I always source it from responsible farms). But it's the same cut–a shank bone–just a more rustic and improvised preparation: beef stew with the drama of a marrow bone. Since it's a muscular (hence flavorful) cut of meat, a long braising time is needed, and to that I tack on a resting period; overnight is best, but if that's not possible the dish can be cooked in morning, rested for the remainder of the day, then re-heated for dinner. Traditionally the Milanese serve their osso buco with risotto, but since this was a bastardized version of the classic, and I had all those roots on hand, I made Mario Batali's "turnip risotto", from Simple Italian Food. It's a lot of meat, so whatever we can't finish gets thrown back into the braising liquid and saved as a beef stew that's even better the next day. 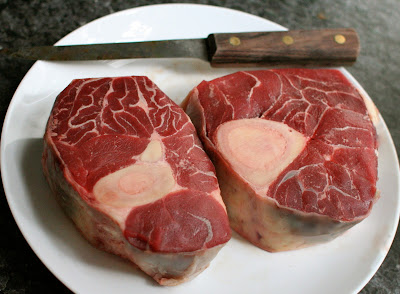 Beef Shank "Osso Buco" for two
Ingredients:
Instructions:
Salt and pepper the shanks. Heat a dutch oven (Le Creuset style, with lid) that will comfortably fit shanks, add oil and brown the shanks on all sides. Remove and pour off any excess oil. Add onions to the pan and sauté for a few minutes, then add garlic, carrots, and celery and sauté for a few minutes more. Remove from pan and set aside.


Deglaze plan with wine, simmer a few minutes, and add shanks back in along with the herbs. Cover with the stock and enough water to submerge completely, bring back up to a simmer and allow to simmer gently for about an hour, uncovered. After an hour, add tomatoes and vegetables and simmer these for 2 more hours, or until meat is falling off the bone and tender. Skim off any grease, and taste and add more salt, if needed. Allow to rest overnight or for a few hours, and serve with gremolata (below) sprinkled on top. Serve with risotto, mashed potatoes, or turnip "risotto" below.

Gremolata:
Stir ingredients together and sprinkle on top of shanks. All that garlic, I imagine, is good for fighting winter colds.


In a large skillet, melt butter and gently sauté shallots until softened. Add turnips and cook a couple minutes, stirring so they cook evenly, without browning. Add chicken stock a ladleful at a time, and stir until stock is absorbed. Repeat with remaining stock until turnips are tender and fragrant, about 10 minutes. Season with salt and pepper to taste, and stir in grated cheese (and more butter, if you wish), about 1 minute. Serve immediately. 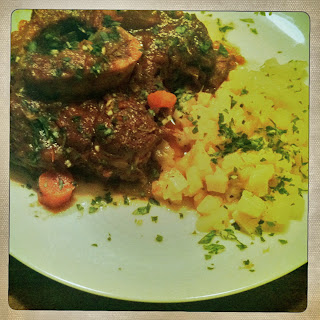 Posted by claiborne at 2:42 PM