A couple of nights ago at the family table, we paid tribute the great Stephen Hawking, who had left this world in the wee hours of the morning, and whose magnitude we wanted to make sure the kids appreciated. We parents and the big girls got appropriately science-nerdy and then a bit existential as the discussion flowed from black holes to cosmic energy, to the notion of a holographic universe, and then on to Elon Musk’s assertion that we are living inside a computer simulation and that A.I. is really in control of us all.

The five-year-old, who would rather be building Legos than pretty much anything else, normally stages a complete shutdown during such discussions; talk about meerkats, dino trucks, and Captain Underpants is more his speed. But on this occasion he got a thoughtful look on his face and waited politely to slip into the next gap in conversation.

We all fell silent, kind of spooked, waiting for him to throw open some goosebump-raising window onto a previous life—perhaps even provide a clue to an unknown realm. We urged him to dig deeper.

“I was in the outer world and then…and then you bought me from the monkey store and I’m in the inner world now.”

I’m not sure what the takeaway was from the conversation, but we all fell silent and resumed enjoying the no-brainer chicken dish I’d put together on the fly moments before. It's a one-dish meal that will by no means solve the riddles of the universe, but it's kind of everything in our inner world, on a weeknight, when we don't feel like scrubbing more than one pan but we do feel like something warm, tangy, saucy, and restorative. It's amenable to infinite variations and can be prepped ahead, refrigerated in the pan, and pulled out when you're ready to roast. It's genius in its own right.

“It would not be much of a universe if it wasn’t home to the people you love.”
—Stephen Hawking 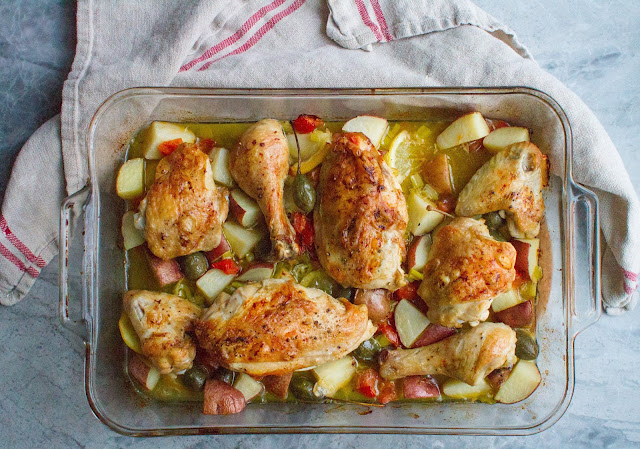 One Pan Chicken with Lemons, Caperberries, Potatoes
Serves a family of 4-5
Ingredients:
Instructions: