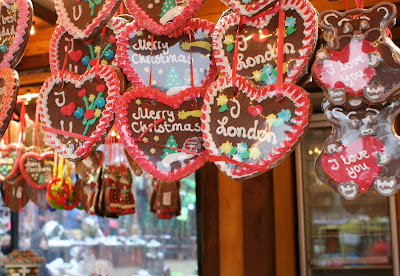 Most people have their family reunions in summer–at least that’s what I’ve always believed, since the ones I attended growing up centered around rivers or feral lawns, and my bare knees always emerged pink and scuffed from the festivities. But the family that Ben and I have created is a little backwards, and we try to get it all in during coat season. Virginia is for Thanksgiving, New York and Colorado are for Christmas, and we’ve taken to visiting England in between, in order to see the brigade of aunties, uncles, cousins–and most importantly Ben’s Granny, who doesn’t travel any more. I suppose we could accomplish this over summer vacation without pulling our kids from school, but then we would miss out on London’s sparkly pre-Christmas vibe, and the fun of taking the girls to see dignified “Father Christmas” instead of the more clownish American Santa (FYI: Father Christmas requests mince pies and sherry for Christmas Eve sustenance). Another reason for enjoying London in December is the typically mild weather, conducive to getting out and strolling the festive streets at night. Except this time around things were a little…backwards. 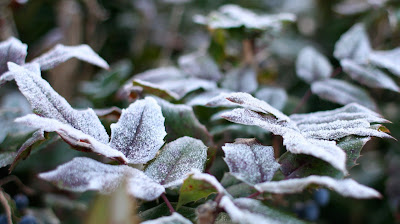 We arrived to a shell-shocked London, a snowstorm having just whipped through and shut down Gatwick airport for two days. The Brits were complaining bitterly about the minus-two (Celsius) temperatures, newspapers proclaiming things like “England is in the grips of once-in-a-lifetime deep freeze.” Scotland was especially hard hit. There were stories of people falling through ice after attempting to rescue marooned pets (“If your dog falls into freezing water”, one article counseled, “resist the temptation to go after it.”). My amusement over all this panic wore off as soon as I realized that most of the places we went did not have boilers designed to keep up with the sub freezing temps, so even though we like to think we're winter warriors, we found ourselves shivering along with the rest of them. It was an inverted version of the summer we spent in London, in 2003, when I had packed raincoats and sweaters, only to be socked with a record heat wave and no A.C. (meanwhile, a damp, gray, London-like summer was playing out back home in New York, where my sundresses hung). 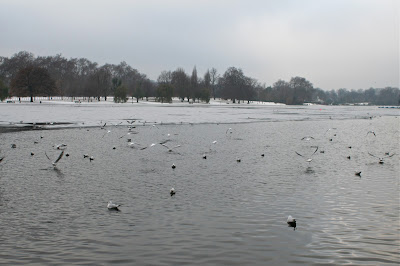 London is a comfortable city, aside from the over-the-top prices. The first time I visited, I felt like I had lived there in a former life, the buildings and streets and sounds already familiar. It’s not a city that grabs me like Paris can, but it feels happy and genuinely fun. I'm thrilled by its history and eclectic architecture, and tickled by its quirks. Here are a few highlights from the trip: 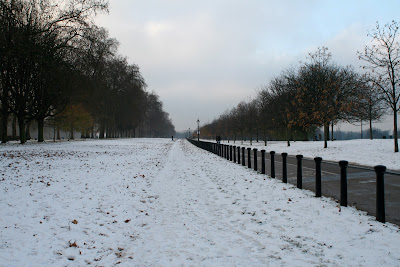 Winter Wonderland: Who knew that the European, wintertime equivalent of one of our beloved country fairs would be waiting in Hyde Park, just steps from our hotel? A dusting of snow made the whole setting deserve its name and also seemed to scare off the crowds. Bleary from jet lag, we stumbled into a blazing and blipping carnival world of rides, bavarian-themed food booths, and games of skill and chance; archery with real live arrows was one, and I gave it a whirl without any success. 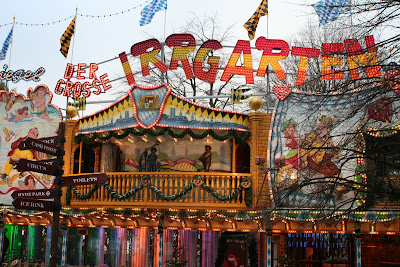 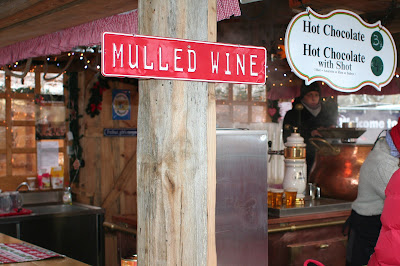 Top Tea: As we walked out of the park my 6-year-old was silent for a moment then asked “are we going to have top tea now?” It took us a second to realize she meant High Tea, which I don’t know if anyone under the age of 70 takes anymore, so we humored her and went to Ladurée for macarons. It wasn’t very English apart from being adjacent to Harrods, where we had just stood in line waiting to see Father Christmas only to be told he was “all booked up.” The sweets softened the disappointment, and both girls fell asleep on our laps, in a dreamy haze of jet lag and pastries.
Double-Decks: My four-year old, from the moment we landed, demanded we ride on a "double deck" (bus, that is).  She didn't care where we went, she just wanted to climb aboard and look down on London from dizzying heights. Finally, on our last day, her wish was granted and she and her sister snagged the front seat up top. 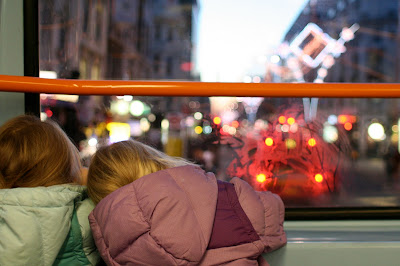 Plumbing curiosities: I didn't consider waterworks much when I spent time in London before kids, but this time around I couldn't escape them, mainly because of all the questions I had to answer each time we visited a new loo. Traveling with children is funny like that: you're more acutely entertained by things you would have barely noticed before. Like English lavatories, where you never know exactly what you’re going to get. Flushers may need to be held down or may have to be pumped vigorously a couple of times to get things going. Or, there might be a rope dangling from a water tank above the loo. My daughters were endlessly confused and amused. At the sink, you more often than not get separate taps for hot and cold. I’m perplexed by the fact that the British can engineer state-of-the-art green skyscrapers but can’t figure out how to mix hot and cold water together–so you end up freezing one hand and scalding the other. And when you're finished, the now ubiquitous Dyson Airblade awaits. It resembles a modern cross between stocks and a guillotine, and once you work up the courage to insert your hands inside, the blower lets out a deafening, high-pitched roar that never failed to set both my daughters howling.

Those Phone booths: they're so delightfully British and I hope they never get phased out, even in a future where land lines become obsolete. But I've never once seen anyone making a call in them. They seem to function solely as strange, free-standing galleries for X-rated flyers.
Museum of London: Ben's cousins suggested we all meet up there, since it would be deserted on a Saturday (it's in the City, the equivalent of NYC's financial district). We had the whole place to ourselves! The exhibits were perfectly portioned for the kids, who got to learn about Black Death, the Great Fire of 1666, and other things that kept them awake and terrified later that night.

Family and Friends: Ben's relatives are delightful, and any gathering with them memorable. They really know the art of a good, lingering, chatty meal, and the little cousins always entertain each other, as well. The night before we left London, I also got to see the fantastic Langseth sisters, my dear friends who have lived all over the world but have landed in London for the time being. We hunkered around the back table of a restaurant in Kensington and laughed, drank red wine, laughed some more, and as the place emptied out, contemplated the possibility of getting forgotten and locked in–which would afford us the opportunity for more laughter and wine. Of course, that didn't happen. London shuts early at night. 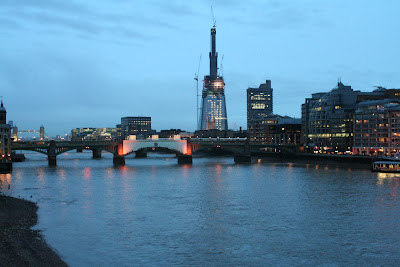 St. John Restaurant had been on my to-do list for years, and I finally got to drag the whole family there for Sunday lunch. Founder Fergus Henderson was at the forefront of the current nose-to-tail eating movement, and his menus offer innards aplenty (Anthony Bourdain proclaimed it his "favorite restaurant in the world"). His cookbooks, The Whole Beast and Beyond Nose to Tail are little gems, both for their recipes and their pithy descriptions. If you're interested in venturing beyond steak and chicken breasts and delving into the rest of the animal (honoring it, actually, by not wasting anything), I highly recommend these cookbooks–and it's not too late to order them as Christmas gifts. In the back, a recipe for a hair of the dog remedy is called, simply, A Miracle and bears a warning: "Be careful: this is so effective you can find yourself turning to its miraculous powers with increasing regularity. Do not let the cure become the cause." 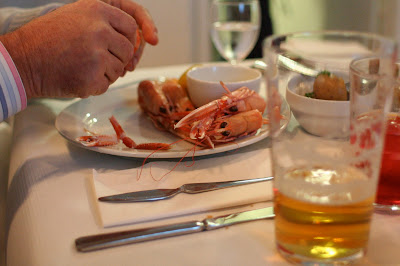 My in-laws were more than happy to try out a new place, and this was English cooking at its finest. Homely, flavorful, resourceful, and warming. And it wasn't just offal: there were sparkling fresh langoustines and mayonnaise, and Ben and his Dad ordered the smoke haddock and potatoes as their main course. I started with cured beef with beets and pickled walnuts, then Ben's mom and I split a pheasant and trotter pie, which was, with its marrow bone chimney and suet crust, the badass answer to the pot pies of my youth. The Whole Beast contains a recipe for it, with the header "This is a most rich and steadying pie." 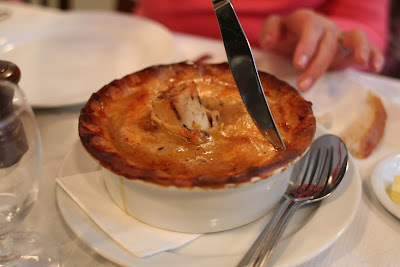 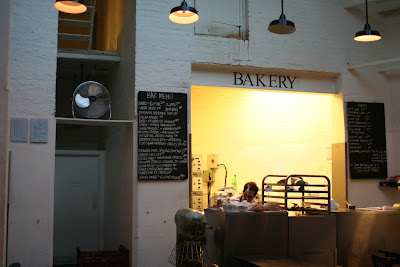 The Countryside: We drove out into the country to visit Gran and the other half of Ben's family, in Essex. His aunt and uncle are bakers (literally–they own a bakery), so we enjoyed fresh loaves every morning. They put on an early Christmas dinner for us, complete with crackers and roast chicken with all the trimmings, and homemade Christmas pudding for dessert. Ben's mom and her sister got into an intense discussion about what makes a proper Christmas pudding, and it was settled that Guinness and a very long steaming are the way to pudding heaven. Since it wasn't truly Christmas yet, though, we didn't set it on fire and run around the table.

Frost: As we explored the countryside, I was captivated by the subtle varieties of frost on everything. Hoar frost, rime frost, feather frost. None of it like the timid Connecticut frost I'm used to, which vanishes as soon as the sun comes up. In damp Britain, it lingers all day, waxing and waning, coating every surface with a silvery sheen and crazy textured patterns. 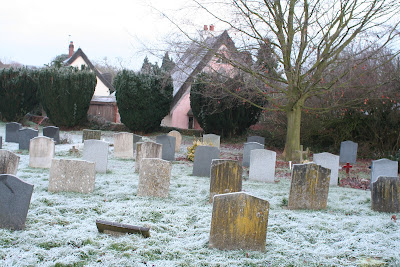 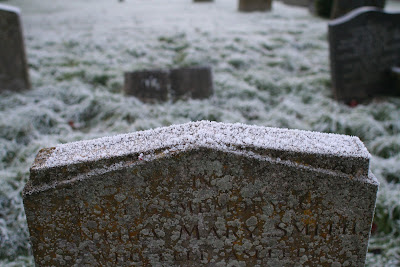 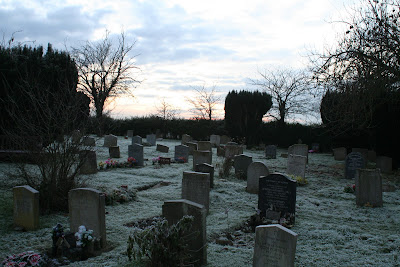 Peacocks that like sticky cake: Need I say more? The owner of the muddy wellies held a cigarette in one hand, peacock bait in the other, to the delight of my daughters. 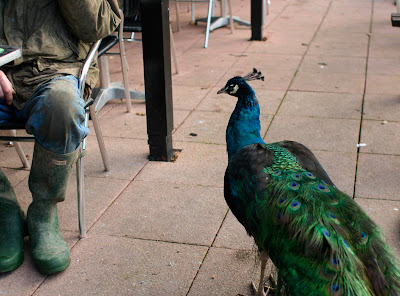 So there you have it. I really would like to reprise one of the St. John recipes, preferably the pheasant and trotter pie if one of my hunter friends will send some pheasant my way–but I've been up to my elbows in cookie dough since our return–so it'll have to wait until January or February. Here's the recipe for the "overindulgence" remedy, which I hope none of us will need this holiday season…but just in case:


Mix together and drink 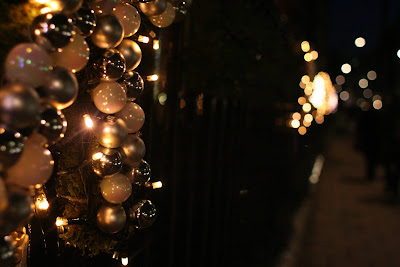