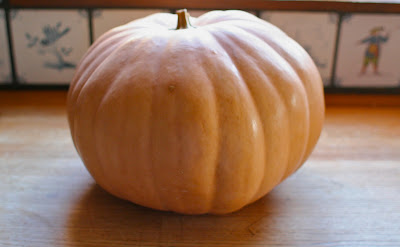 This pumpkin’s journey began in a scenic field beside the Housatonic in Connecticut and will end on our Thanksgiving table in Virginia. It weighed nearly 20 pounds, and my Disney-addled daughters eyed it expectantly, as though it might blossom into a full-sized princess coach, throwing off neon sparks as it morphed. I was sorry to inform them that the transformation wouldn’t be quite so magical–but it would be delicious. For a year I’ve been looking forward to reprising last year’s dessert success at the Thanksgiving stove…except, after holding onto this pumpkin for two months and feeling its particular heft, and watching the light play on its waxy skin, I realized the thought of hacking it apart was causing me pain, and that I had grown way too attached to a vegetable. So I dispatched with the unpleasant task swiftly, aiming my biggest knife through its heart and feeling, as I yanked downward, that special resonance very large pumpkins give off when split. It was a juicy one this year, full of dense, ropey pulp and fat seeds, and shocking tangerine-colored flesh. A long way from the vine, yes, but still somehow coursing with life. I actually felt the same mixture of resolve and regret that had gripped me on my first fly fishing excursion, on a stream high in the Rockies, when faced with the sickening moment when I had to put a brook trout out of its misery.

As with the trout, I offered up a silent "thanks" to Mother Nature and vowed to do the pumpkin justice–to make an even better pie than last year's, which managed to turn the pumpkin pie naysayers among us into yaysayers. 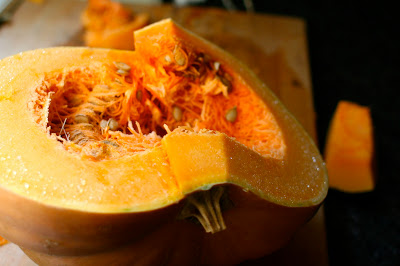 I’ve always been a pumpkin pie person, but for the longest time I labored under the delusion, shared by many, that only canned puree will do–because somehow it’s smoother or sweeter or cures during its stay in the can. But it turns out that an even better pie–lighter and brighter and more subtle tasting–is to be had from a freshly made puree, and why shouldn’t that be the case? It’s all about choosing the right pumpkin, but even then, I've heard, quality can be uneven among single varieties. I will say I’ve found that anything bearing a resemblance to a Halloween pumpkin is disappointing in flavor–and that the sugar pumpkins I’ve tried have been anything but sweet, and fibrous to boot. The variety I’ve been using these past two years is a Long Island cheese pumpkin, so named for its squat, round, wheel of cheese shape. Its faded-looking tan exterior conceals a brilliant flesh that cooks down sweet and even-textured. 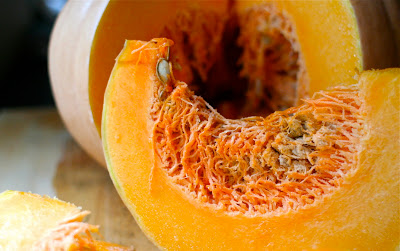 Some other varieties you might try are anything labeled a "pie pumpkin," as well as Cinderella, Rouge Vif d'Etampes, Jarrahdale, hubbard squash or even butternut squash–which is actually what's in those cans, and is a close relative to the cheese pumpkin. Turning a large pumpkin like the one above into pulp can be a laborious process, what with all the hacking, roasting, and whirring, but if you make a lot the pulp freezes beautifully for plenty of soups, bread, baby food, and–yes–pie filling to last you the winter.
As for the pie recipe, it's the pumpkin that makes it, and the crust is a nice buttery, flaky one. But the crystallized ginger garnish is really the secret weapon here–the crunchy bursts of sweet spiciness add nice little bits of texture and heat, so don't skip that part.
After I navigate the Jersey Turnpike and the quirks of my parents' kitchen (including my mom's electric mixer, which was a wedding gift in 1968), I'll offer up a couple of these pies as my contribution, since we'll be making merry with a large gathering of family and friends, all of whom will bring something to the table (my daughters, I hope, will not be bringing the germs this year). There are hunters among us, so we'll enjoy whatever roasted game birds they've bagged. I'm told many dozen Chesapeake bay oysters have been ordered by our hostess, Perry, to get us started–and all of this is on top of the traditional fare. Thankful? Yes, but I'm already hurting just thinking about the feast that lies ahead. 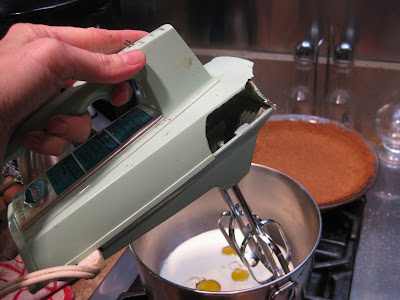 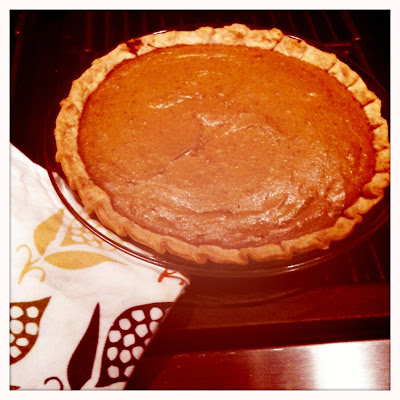 Preheat oven to 375º. Cut pumpkin into chunks roughly 2”–leave skin on. Arrange them in casserole dish(es) so there’s space in between, cover with foil and poke holes in foil. Roast for about a half hour, then remove foil and continue roasting, about a half hour more, until any liquid has evaporated from bottom of pan and pumpkin is very soft. Cool, cut off skin, and puree in a blender or food processor until smooth. If the puree seems watery, place it in a fine mesh strainer over a bowl, for an hour or so, to drain off excess liquid. Ingredients for the crust:
Makes 2 crusts–you may double pie recipe or freeze the extra
Adapted from David Lebovitz, Ready for Dessert
Instructions for crust: In a food processor, pulse together flour, sugar, and salt to combine. Add butter and pulse a few times until butter pieces are broken up and incorporated. Continue pulsing as you dribble in a little water at a time, until mixture just begins to come together–you don’t want dough to be too wet. Remove from machine and divide into two pieces, press into disks, wrap in plastic wrap and refrigerate for at least an hour. Have a 9” pie pan ready. Remove dough from refrigerator and allow to soften at room temperature for 10 minutes or so. On a floured surface, roll dough out into an even circle about 12" in diameter, then carefully drape over pan and press dough onto the surface. Trim the dough around the outside rim, then either crimp edges or press onto rim with your fingertips. Prick bottom with the tines of a fork, and freeze for about 30 minutes. Meanwhile, preheat oven to 375º, to pre-bake the pie shell. Take pie pan from freezer, line with foil, and pour in dried beans, rice, or coins to weight. Bake for about 20 minutes, or until crust begins to turn golden. Remove foil and weights and back uncovered for about 10 more minutes, until bottom is beginning to color lightly. Cool. Ingredients for the filling:
Instructions for filling:
Using an electric mixer, beat together all ingredients until combined and smooth. Assembling pie:
Preheat oven to 350º. Spread filling into pie crust and bake for about an hour, checking just before then, until center is just set. Remove and cool. Just before serving, sprinkle with chopped crystallized ginger and serve with whipped cream. 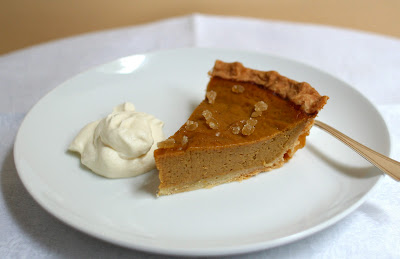 Posted by claiborne at 2:00 PM