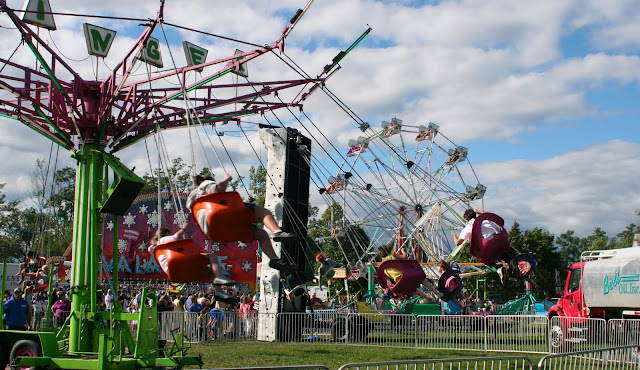 If you’ve never visited a country fair this time of year, do yourself a favor and hop a bus. Now. They're sprouting like mushrooms from the cooling soil just outside of cities and suburbs, and they won't stop until the last leaf is off the tree. Hokey, you say? You might well take that stance, if you happen to consider tractor pulls, whack-a-mole, and giant pumpkins hokey…but for me, these things all add up to charm. 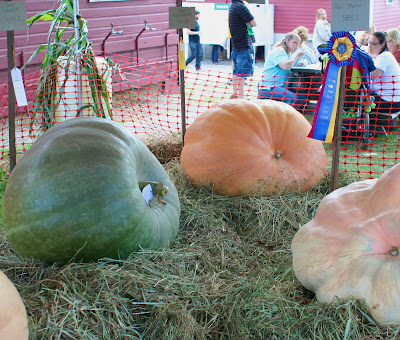 They’re wholesome and pleasantly seedy at the same time. I can't help but think of that fabulous rat Templeton, from Charlotte's Web (I'm envisioning the musical 70's movie version, guys), gorging himself drunk amid trash bins and animal stalls.

If you’re a little kid, these venues are great, giddy fun, with their carnival lights, dizzy rides, and petting zoos of youth-raised livestock. Having not grown up in the proximity of country fairs (at least not that my parents let on), I consider it my personal duty to make up for lost time and haul my daughters to them every chance I can get–often to Ben’s torment. In fact, the children make a pretty handy excuse. We started with the 4-H fair when they were babies and now we’re on to the ones with amusements galore, most recently the Goshen Fair, which is kind of the sultan of the local fairs. We’re still in that sweet childhood phase where the merry-go-round is the hottest thing going. That's more than fine with me, since I discovered in my 20's, at Rye Playland, that my vestibular system is no longer cut out for those tarted-up instruments of torture called rides. 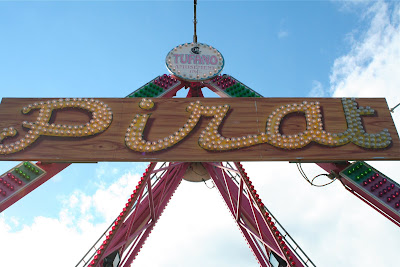 More my speed was the rural tools exhibit, in the dusty loft of a barn. What purpose, you might ask, did that rickety old contraption below once serve? 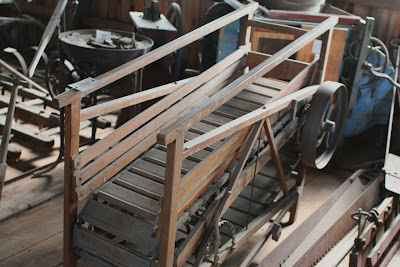 If I had one, I could harness my dog's hyperactivity to make butter. 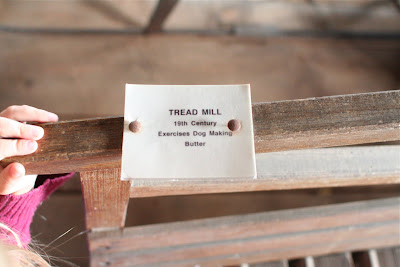 Now that we're talking about food, let's discuss all the treats to be had at these fairs. I have a feeling there are some who pay the entrance fee solely for the edibles, and at the Goshen Fair there were entire makeshift streets (plural) devoted to them. Aside from the samplings of pies and other homemade baked goods, there were all manner of roasted corncobs and meats, gargantuan sandwiches and sundaes. By far most impressive, though, was the array of deep fried delicacies. We spied onion blossoms and steak bombs, mini donuts, apple fritters, and churros. 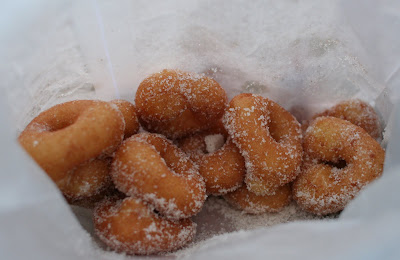 Anything you can plunge into hot oil, those vendors did–except, alas, for battered candy bars, which seem to be the province of Southern country fairs (and chip shops). The aromas of all these things, as well as the sounds of sizzling and popping, swirled all around us in a confusing vapor and rose up into the blue autumn sky. 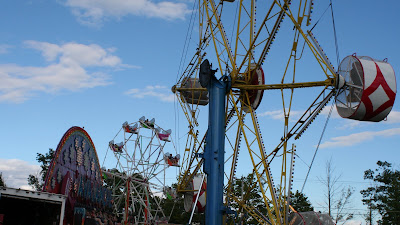 Spending the day at a country fair can be exhausting to the senses, so it's a good thing they don't happen every weekend. For now, we've retired to the more restful pursuit of apple picking for a while, particularly since the apples are coming in early and fast this year and need to be collected. I wish I could say our own trees were keeping us busy, but thanks to the industrious critters in our yard, we could count our harvest this year on one hand. 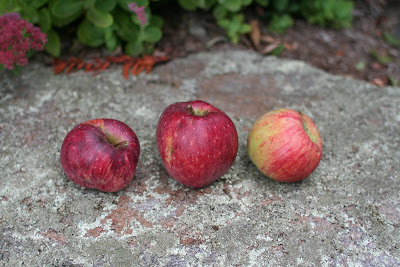 Around the corner from us is Averill Farm, in Washington, Connecticut. They use minimal spray, feature at least 15 varieties of apples (plus pears and quinces), and have been around for over 100 years, so many of the trees are twisted, bowed, or hollowed out into sculptural forms. We imagine they would make great homes for hobbits. But the real lure at Averill are the homemade apple cider doughnuts, made fresh, right there, every day. They're best purchased by the dozen and still taste amazing the next morning with coffee. 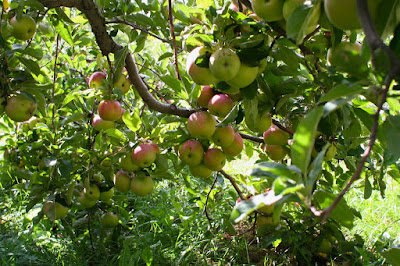 The direction I was going with this post was a fried apple recipe, some kind of crisp and dreamy apple fritter in keeping with all the fried dough we have been enjoying in the country. But to be quite honest, the weather turned hot this week and our A.C. is broken, and the last thing I want to do right now is spatter the kitchen with hot oil. Plus, I need to use up more of our fruit, and some of the applesauce I made. We picked bags of apples and then two days later received 5 varieties with our CSA. Anyone else crying "uncle" yet?


So I'm going with an old standard. This pretty bundt cake is something I have baked every fall since stumbling upon it in the November 2002 issue of Saveur. It's simple to make, and if you don't own a bundt pan, you can make muffins. A slice is laden with healthy fruit and nuts, and owing to the quantity of diced apples and applesauce, it's pretty difficult to dry this cake out. Not overly sweet, it nimbly treads the line between dessert and breakfast (or snack)–and it would fit right in at a country fair or market, among proud displays of pies, jams, and homegrown fruits. 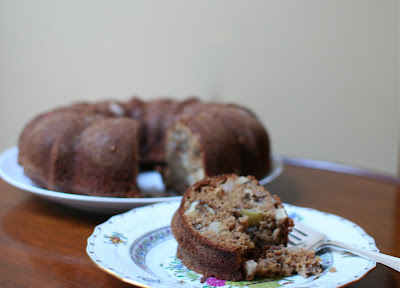 Instructions:
Preheat oven to 350 degrees. Grease a bundt pan (or muffin tins) with butter, then dust with 1 tablespoon flour and knock out any extra.
Sift together flour, sugar, cinnamon, baking soda, baking powder, and salt into a large bowl, and whisk together. Stir in applesauce, oil, and eggs until just combined. Fold apples and nuts gently into batter.
Pour batter into pan and smooth out top so it's even. If you're making muffins, fill cups 2/3 of the way to the tops. Bake about 1 hour (about 45 minutes for muffins), or until top is nicely tanned and a toothpick comes out clean. Allow to cool for 20 minutes, then invert onto a large plate. 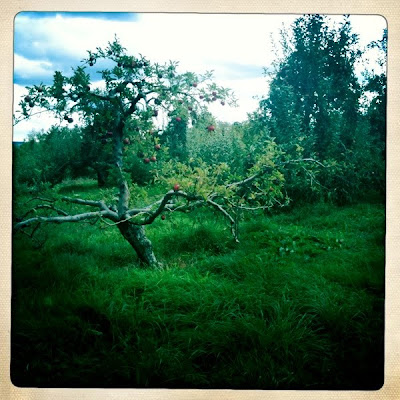 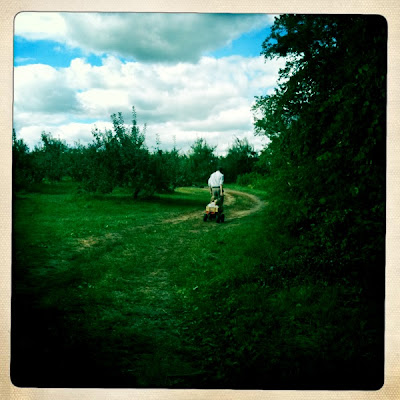 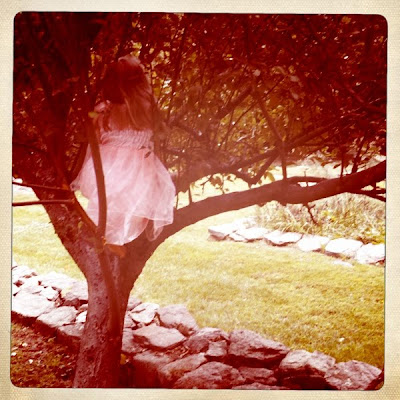 Posted by claiborne at 4:12 PM