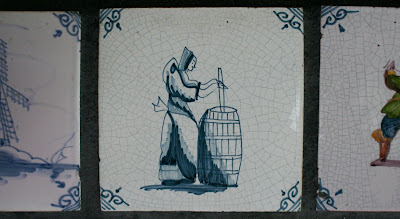 The other day, my old man asked me when I planned on actually writing about butter and bread, rather than just using the words as a name for my blog. He had a point. He is, after all, the guy who coached me, at age 2, to identify and name all the herbs in the garden, and taught me how to make snow ice cream as a child and omelets when I was a teenager. Later, he passed along other useful tidbits, like how it's a bad idea to throw back tequila at the end of a night of drinking…and something about never, ever reciting the prologue to the Canterbury Tales, in Middle English, to the cops. Since all of this guidance served me well at one time or another, I figure I should listen to him now, right?
So this one's for you, Dad, if you happen to be reading. As it turns out, this summer has been all about making my own butter–and bread. Probably, that’s why I haven’t gotten around to blogging much lately. Out in the country, we have access to quantities of raw cream straight from the farm, which is Stone Wall Dairy Farm in Cornwall, CT. Between shepherding children, driving from farm to farm to do our dinner shopping, and the shaking and rinsing that goes into making butter, there’s precious little time left for the computer–a blessing, really. 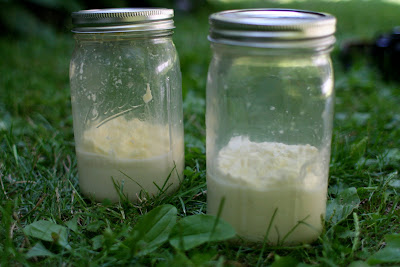 The butter started as an activity for the kids over 4th of July weekend, and then it just kind of stuck: we make our own butter now. My daughters have pretty much lost interest in the shaking of mason jars, a mindless pursuit I find to be a satisfying companion to porch-sitting when my hands get twitchy, but I don't have the time for a real project. It's more idle than baking, more productive than staring off into space.

The first time I went by the farm to fetch a gallon of cream, the folks there were more than happy to talk me through it. The farm owner, a man of few words, said “you have to wash the butter, you know…you have a computer?” And the lady farmer, who looks after the chickens (which, by the way, lay some of the orangest-yolked eggs I've ever seen), chatted me up about her own technique: leave the cream out on the counter until it is about 65 degrees, otherwise separation will take forever. Then she went on to describe, in detail, the process of washing the butter…and passed along her bread recipe, too.
Except, the washing part was a little tricky to get a hang of. The shaking part, too. On my first go, I shook the jar too hard and too long, beyond the point of separation, heating the whole business up and frothing it back into emulsification–so I got a kind of whipped butter that seemed more cream than butterfat. This was just a mess to wash. After poking around on the internet for suggestions vis-a-vis temperature, I determined the best combo is to leave the cream out until it’s coolish room temp, chill the mason jar (or other butter-making implement), then shake the bejesus out of it. There's that magical moment when the cream, which has become so stiff it’s all but impossible to budge, suddenly breaks and there’s once again sloshing within the jar–but a different, more emphatic kind. Sploosh-a, sploosh-a, sploosh. A few more shakes and you’ve hurled the butterfat into shape–with any luck a firmish yellow ball of it. Pour out the thin buttermilk it's bobbing in, and save that for pancakes or biscuits.
If you have nice chilly water flowing from your spigot, as we do (it’s from a spring), just run it into a comfortably-sized working bowl, press the butter blob down into the side of the bowl, and “massage” the buttermilk out. They make special paddles for that, but I find clean fingers work just fine. If your water runs tepid (as does our water in Brooklyn during the summer), drop an ice cube or two in the bowl–that's to firm up the butter and make it less sticky. As you press on the butter, you’ll see buttermilk wisp and fog into the water. Massage the butter and change the water a couple times, until it runs clear. Then dump out all the water. I blot the butter with a clean paper towel and mix it with a little sea salt if I’m so inclined. If you have fresh herbs lying around, like chives or tarragon or thyme, chop them up fine and fold them into your shining new butter while it’s still soft. Compound butters are decadent simplicity on grilled fish or steak…or of course, bread.

Last week, I took a break from all that crazy shaking and drove from Brooklyn to Cleveland, to visit my dear friend Cary. She’s the only one who could ever convince me to make that drive. Let me tell you, it turned into a grueling 12 hours (one way) with 2 kids in the back, and that night I was still dodging tire retreads in my sleep. On my way there, when I was about to burst into tears after 4 hours and little progress, she called to check on us. We were somewhere in Pennsylvania and had just eaten a grim lunch at a "family restaurant" off the highway (it involved scoops of coleslaw dusted with cinnamon).

“Where am I? What’s out there, anyway?”
“Amish country,” she said, and then her voice shifted, and I knew she was going somewhere with this. "…which gives me an idea for when you’re here.”
Two days later, we wound up in Amish country, Ohio, with our 4 kids and an ulterior motive of shopping. It turns out Ohio has the biggest Amish population of any state in the U.S., and as we entered the heart of it we spied their black buggies stamped with orange reflector triangles. Women rode by in their long, dark dresses and little white pillbox hats, children in their gauzy black sun bonnets. We saw men's heavy black trousers pinned  to clotheslines and spotted families working the fields in 90 degree heat, their hand-heaped haystacks stretching into the distance like something out of a Millet painting. After a while we forced ourselves to stop slamming on brakes and snapping pictures, once we realized we were behaving like tourists on safari. 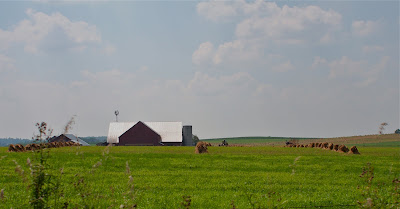 Then we reached our goal: Lehman’s, a mega-store built in 1955 to serve the Amish. They specialize in “old-fashioned merchandise”, much of which operates by hand–a must if you’re not allowed to use electricity. There are wood stoves, grain mills, lots of cast iron, and even a literature section. 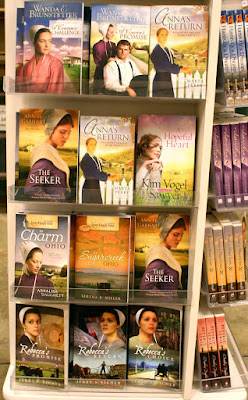 I headed straight for the butter-making aisle. 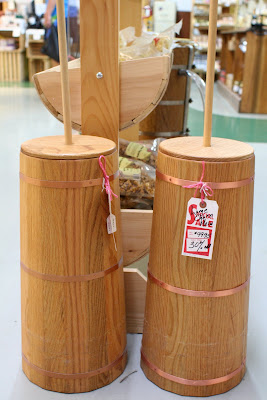 They actually had these! Exciting stuff, but alas, their scale is incompatible with our living space–I would have had to give away the dog to make room for one. I did, however,  walk away with the rig pictured below, along with countless other items to simplify my life, Amish style. Ironically, all they really did was make me more of a consumer. 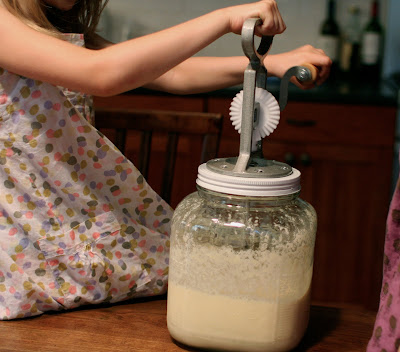 I can now spin butter by the pound rather than the pat, and each time I do I thank the ladies: Dolly and Stardust and Miracle and Dancer and the rest of those pretty Jersey cows we visit whenever we pick up our milk, cream, and eggs.
Note: Since raw cream can only be sold frozen in Connecticut, I've been mostly working with thawed cream. I've also tried ultra-pasteurized, homogenized supermarket cream with similar results.

This butter still contains a bit too much water to be ideal for baking–I haven't worked that one out yet. My choice for baking is organic, European-style butter (it has a high fat content). Check the label. "Natural flavors" are anything but, and can impart an almost artificial buttery taste.


Homemade butter:
Instructions:
Let cream sit at room temperature (low 70's) for a few hours, so it's no longer cold. You can chill your jar. Pour cream in the jar and shake for around 10 minutes. The cream will thicken then separate into butterfat and buttermilk. Shake for a few minutes longer, until buttermilk forms a single mass. Carefully pour off the buttermilk into another container. Put the butter in a medium bowl and fill with chilly water, adding a few ice cubes if necessary. Carefully "massage" as described above, pouring off water and repeating with a clean change of water, until no more buttermilk clouds the water. Pat butter dry, mix in salt or herbs if desired, and store in a mold or rolled into parchment paper.