My mom had certain rules about food when my sister and I were kids, strict lines we were not to cross or we were entering into hostile junk food territory. Let’s just say we had to sneak over to our neighbors’ house for our Twinkie fix, and the jones was fierce. Mom made sure we had salad every night, and there was no way in hell cafeteria food was passing our lips. But then, her Berlin wall-like barriers were somewhat arbitrary. For instance, she wouldn’t dare bring home Frosted Flakes, yet she plied us full of Quaker 100% Natural, which probably had twice the corn syrup and derived its crisp from hydrogenated oil. And in the kitchen she kept a gum drawer, which all the neighborhood kids were wise to and raided on the sly. It was full of Chewels. Remember those? You bit into the sweet pink gum cushion and got a squirt of sticky fuchsia syrup in your mouth.

But Mom’s firmest line was drawn right down through the middle of Entenmann’s country. It dictated that never would a box of Entenmann’s coffee cake or doughnuts see the inside of our house, but the chocolate chip cookies were a-OK–in fact, a staple of every Safeway haul. Health food. But, there were limits on even those, and we were allotted precisely two a day, after school, before homework. We adhered to our two-cookie ration obediently, washed down with our 2% milk. But later, after retiring to my room with my books, I would creep down the back stairs in an Entenmann’s frenzy and collect a towering stack of those cookies, so tantalizingly soft, the chips so sweet they scratched faintly at my tooth enamel. I couldn’t help it–swiping was just too easy and I was a scrawny, ravenous kid with no impulse control. So much for the honor system in our house. Today, I adore the idea of an honor system, and not because I can work it to get more goodies. No. I’m happy to say that this former cookie thief grew up to be a law-abiding citizen; Mom must have done something right. You won’t catch me fudging so much as a snow pea over the weight limit at CSA pick up. I never, ever sample chocolate almonds from the bulk bin–though believe me, the temptation is there.

When we spend time up in rural Connecticut, I delight in all the honor system offerings set out by farmers and folks with prolific chickens or bees. To me, they are an indicator that trust and honesty are sufficiently alive in the world to keep these little businesses going the way they do. Driving down a road, you might see a hand-penned sign proclaiming EGGS or HONEY, propped atop a cooler by a mailbox. Along a minor highway, an unknown someone built a rickety wooden stand, which functions as an unmanned flower booth when its owners get around to stocking it with bouquets. And our dairy staples all come from a farm where there’s a “dairy sales” room adjacent to the milking barn; inside the door a fridge offers neatly arranged raw milk and eggs, and you pay via a wooden lock box plastered with Post-it note IOU’s. You can’t even get change unless the farmer happens to be there emptying out that old-timey till. 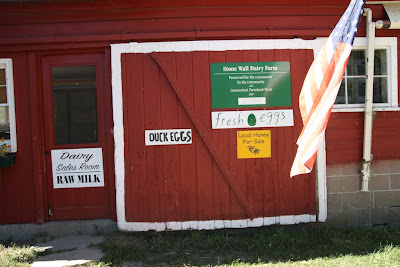 But my most favorite honor situation by far, one I go into yearly raptures over, is the blueberry patch down the road from us. It’s the best blueberry patch on earth–I truly believe this–set back behind one of the most gorgeously bucolic roads I’ve ever had the pleasure of driving down (the same one festooned with maple syrup buckets in winter). Its owner, a lovely lady who settled there decades ago, reserves the right to open the patch at her own convenience–or whim. If a red, white, and blue flag looms into view as you round the bend in the road, your heart sinks and you know you’re out of luck. But if that musty old flag is thrown back to reveal the peeling sign, on goes the blinker. 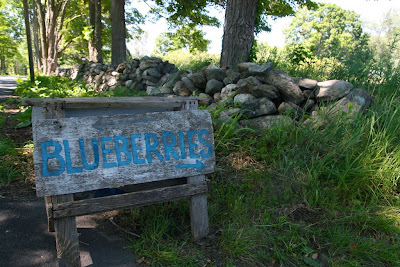 Through a hay field, over a bumpy rise, grasshoppers pinging off the car’s grill–that’s the way to the patch, which opens up on the far side of a small apple orchard, beside a pond where bullfrogs burp and thrum. The owner of this small farm once told me the land was all apples when she first moved in, but she doesn’t much care for apples so she ripped out most of the trees and made way for the blueberries, which she adores. Welcoming the public into the patch–and her home, really–is the only way she can possibly keep up with her crop, so she hung a scale and set a little money jar on a table in the open barn. They’re organically grown, these berries, and she picks off the beetles by hand, drowning them in coffee cans of soapy water, and keeps the birds at bay by netting over the whole thing (more power to the occasional lone bird that finds its way in). 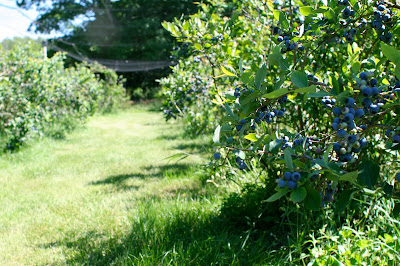 It’s best to bring your own containers, though usually in the barn you'll find a carton or two, maybe some plastic bags or a cut-open orange juice jug for collecting. If you’re thoughtful, you will, in turn, surrender whatever surplus cartons were lying around your kitchen. That’s collectivism at work. Follow her note to find the ripest berries (because she probably won’t come out to tell you in person), go in through the mesh door, and settle into a rhythm. 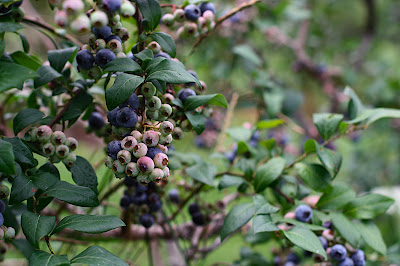 My kids are pros now, I’m proud to say. Over the 4th, we spent a sweaty afternoon picking with our friends Tara and Josh, and the four kids between us more than contributed to the pie that night. Is it child labor if they gorge themselves purple on their favorite fruit? 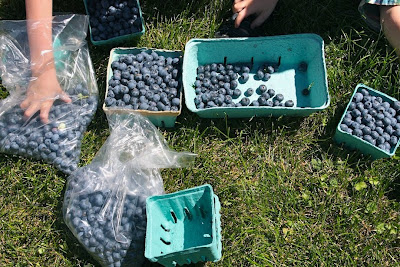 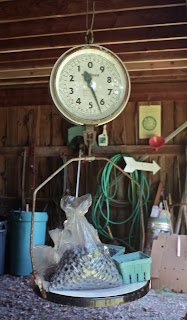 Tara and I swear the berries taste different on each of the 100 or so bushes, and each time we make a game of finding our favorite, the one with just the right balance of tart and sweet. Grabbing as many as we can get becomes compulsive and hypnotic, and usually a kid at the point of meltdown is what it takes to rouse us from our stupor. We weigh our take on the scale in the barn, rounding up for those intercepted by our stomachs, and go bouncing back over the field, dreaming of the things we'll bake. Inevitably, someone sits on a bag or capsizes a carton on the ride back, but those squished berries don't have to be goners–they just have their own purpose now. Into the freezer they go, where they will later fill out smoothies and morning baked goods, well into the winter if we stretch them out. And plenty get devoured as is. Last year I held off on cooking them for the longest time, because I wanted to burn the taste of fresh summer blueberries in my memory. So I whipped up a lemon vanilla ice cream, super rich and custardy, and tumbled berries on top. One day I'll post that recipe for you. Then, of course, came the muffins and scones that roused the kids from bed before camp. For the 4th this year, we improvised a pie by baking a simple graham cracker crust, cooking berries down with sugar and lemon zest, and then baking it all with an easy crumble topping. Incidentally, we strained away some of the berry juice prior to nestling them in the tart shell, and it made a delicious sauce over pancakes the next morning.

The recipe below is something a little different. Back when I was catering parties, this was my go-to dessert during blueberry season. It's taken from Claudia Fleming's beautiful cookbook The Last Course and is ever so slightly fancy, sophisticated enough for a dinner party or host(ess) gift but soothing in its interplay of childhood flavors of graham cracker, cream cheese and blueberry. If it seems too complicated and rolling your own graham cracker is not your thing, you can cut corners by using a store-bought graham cracker crust, or the simpler one I linked to above.

Thank you, Tara and Madeley, for supplying many of the photographs in this post! 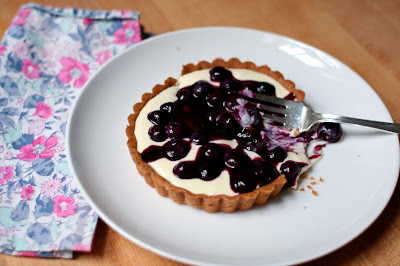 Adapted from The Last Course, Claudia Fleming with Melissa Clark

Posted by claiborne at 3:01 PM