My three-year-old could knock you out in a pancake-eating competition. You think I’m kidding. I’m not signing her up anytime soon, but I’m already noting her technique, which is eerily similar to that of Takeru “Tsunami” Kobayashi, of Nathan’s Coney Island hot dog eating contest fame. I can barely flip pancakes fast enough to keep pace. We call her Tough Mama, even though she’s a tenderhearted little girl. This tiny kid has big energy, and she greets each day with gusto: making her bed, launching a monologue at her unconscious parents, dressing herself in some crazy getup–all the while belting out This Tornado Loves You. On Saturday mornings, we aren’t quite ready for all that sunshine. My solution? Bribery. And the standard payoff for one more hour of parental sleep is…pancakes. She talks about them all week, asks hopefully if we might have them on a Tuesday (no), flashes her gap-toothed grin, never lets up–despite knowing they’re a weekend privilege. Really, though, I suspect pancakes are a mere vehicle for maple syrup, on which she has fixated since before she had the teeth to chew real food. Just as her full-throated laugh grabs hold of our hearts, so her passion for maple syrup has planted roots in our house, blossoming and catching us off guard this spring. We hadn't much considered this New England staple before; though it always sat in the cupboard, right by the sugar, we kind of got more excited about mustard. My husband even spent much of his youth on a farm in Vermont, where he was put to work each year tapping the sugar bush, but he's never been much of a spokesman for the maple syrup industry. This March, though, all it took was a simple question from her, as she gazed out of the car window at a row of trees along the Connecticut roadside: “what’re all those buckets?” 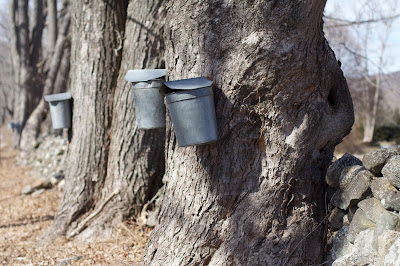 Suddenly, we began viewing the enterprise in a whole new way. Driving around the countryside, we noticed buckets adorning trees everywhere. And, maybe I’m easily charmed, but will you check out how each one of them has its own, adorable little tin roof? They’re collecting the sap that’s rising! And it’s rising because spring is coming, and suddenly there’s payoff for living somewhere that lingers forever in winter’s hooks. It hit us all at once, this epiphany–all except for Tough Mama, who had understood the specialness of maple syrup all along. So we decided to visit a sugarhouse, to see how that sweet, liquid life gets made. This time of year in the Northeast, as soon as you get off the highway you can see the galvanized buckets strung all over the place, acres of tubing crisscrossing the forests, and steam chugging up out of backyard sugar shacks. I won’t go so far as to say you can smell that caramelly maple smell in the air, but you practically can. As soon as you open your eyes to it, it’s all around. We found our sugarhouse of choice, Brookside Farm II, on the internet–it was one where the man who makes it answered the phone and said yes, bring your kids, I’ll show them the buckets and they can taste some sap right out of the tree, and we’ll start boiling at around 3:30. So we pulled up on that sunny day, and there were the buckets and the sugarhouse with its plumes of smoke, and a tree full of apples–intentionally left unpicked last fall, for the birds. Mark Harran is his name, and he’s a machine enthusiast. Not only does he own a beauty of a sap evaporator, all gleaming chrome, but he’s got a barn full of vintage John Deere tractors, scaled down from the 100-odd machines he once owned. He's also president of the Maple Syrup Producers Association of Connecticut, has run Brookside for 10 years, and seems to know everything there is to know about syrup making. He gave us a lot of stats; did you know it takes 70 gallons of sap to make just 2 gallons of maple syrup? Of course, it starts with the trees, and it starts some time in February, when the daytime temperatures reach up into the 40’s but still dip down below freezing at night. The bucket’s the old school way, and Harran still keeps a couple of them around (though he has mainly switched to tubes). We put a finger underneath the spout to catch drops of sap, which tastes like water with the faintest sweetness. The tap drips steadily into the bucket, and the sap is emptied into a tank and boiled down each day (if you let the stuff sit too long, it begins to ferment). These days, most producers use the more efficient (if less quaint) tubing method, in which sap flows out–or is extracted via vacuum pump–into collecting tanks, then boiled. A tree must be at least 60 years old to be tapped, and the one pictured above is over 300.

The sap boils steadily in the evaporator until it reaches a certain density, then is filtered and flows out, to get graded. We helped grade this batch (it was grade A/medium amber). Later in the season, when sap requires longer boiling to reach sugar density, the syrup will be darker–grade B. To me, "B" sounds like an unfair label, as the late-season product tastes deeper and richer, and asserts more personality in cooking. We left toting two enormous jugs of maple syrup: one grade A/medium amber, for Saturday morning pancakes, and the other grade B (last season's), for sweetening and flavoring recipes. Though the cooking possibilities are endless for sweet as well as savory (a glaze for pork roast, for instance, or drizzled over roasting root vegetables), the first thing I made were maple-vanilla pots de crème–kind of like crème brûlee without the burnt sugar on top. The maple flavored them delicately, and I realized how much sugar I could be replacing in baking with this amazing, locally-made sweetener. The basic ratio and technique are borrowed from Patricia Wells At Home in Provence (hers are lemon), an old favorite cookbook that has never let me down.
My daughters simply call it Maple Syrup Pudding, but this is no nursery pudding–it's rich and decadent enough to serve at grown-up dinner parties. I'm dreaming of spooning some up with strawberries in June, when fat, juicy ones will dot the Connecticut fields now fringed with snow and bare maple trees. Preheat oven to 325 degrees. In a medium bowl, whisk together yolks, cream, milk, and maple syrup until blended. Try not to agitate too much–you want the final result to be smooth and nearly bubble-free. With a sharp paring knife, slice vanilla bean longways. Using the dull side of the knife, scrape the inside of each half over the bowl, stirring the pulp into the cream mixture (put the empty vanilla bean pods into a small jar of sugar, and in a week or so you'll have vanilla sugar). Strain mixture into a clean bowl or spouted pitcher.


Arrange ramekins in a roasting pan or deep casserole dish, so that none of them are touching. Pour or ladle cream mixture carefully into ramekins, filling them a little more than halfway. Move the pan to the top rack of the oven and, with a kettle, pour hot water in pan around the ramekins, until water reaches to level of cream (about halfway up ramekins). Cover pan loosely with foil so a skin does not form, and cook for 30-40 minutes, checking after the first half hour. Desserts are done when set around the edges but still a bit jiggly in the centers. Remove and cool in refrigerator, loosely covered, for at least 2 hours before serving.