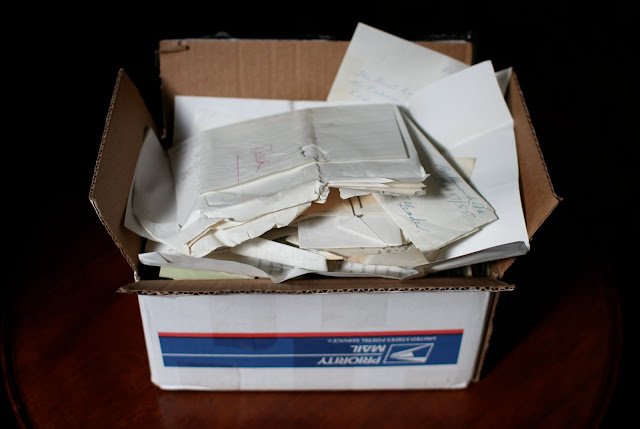 This box sat in the back of the post office for nearly a month before I finally rescued it. Those of you who happen to live on the north end of zip code 11231, as I do, are nodding your heads knowingly right now, because you’re aware that fetching missed packages equals either a hop in the car or a not too pleasant walk. It involves the smoggy BQE underpass, crevasse-like potholes, and hunting for parking in the projects. And usually, at the end of it all, a snaking line. I would rather go to the dentist, honestly, but on this day the journey and the wait weren’t so bad, and I only wish I had gotten up the gumption sooner.
Turns out, the mystery package was a box stuffed with a passel of letters and notes, sent to me by my dear aunt Katie (thanks, Katie!). The owner of all these yellowing, crumpled papers had been my grandmother, who departed this earth going on 20 years ago. Mimi, as we called her, was not just a cool grandmother, who let us rummage through her sewing kit and use her scary kitchen scissors to make jigsaw puzzles…and spackle her powder room walls with soap suds and watercolors (OK, maybe we didn’t have permission for that one), but she was also a prolific food writer–back when Julia Child was first bursting onto the scene. Mimi wrote columns for The Richmond News Leader in Virginia for 30 years, starting right after WWII. I have a manila envelope full of her newspaper clippings, cured to a soft amber hue after 50-odd years of oxidation. For the most part, she wrote recipes–traditional southern ones like Sally Lunn bread, as well as stuff that in the ‘50’s and 60’s would have been considered pretty soigné, like Kahlua Soufflé and Artichoke Vegetable Melange. She also profiled Virginia families leading exotic ex-pat lives overseas. And, one article details the renovation of her own kitchen, in 1964. The black and white doesn't do justice to the avocado green accents, but you can use your imagination:

She was helping along a generation of southern ladies who, like their mothers, had always relied on their cooks; things were changing after the war and household help was in shorter supply (or perhaps just too expensive). Many of the readers would have grown up without family cooking traditions, so they needed someone to hold their hands and talk them through dinner prep. The happy by-product of my grandmother's labors was that my Dad inherited a passion for cooking and impressive kitchen skills, and I grew up against a backdrop of ever-bubbling pots on the stove.

Although she traveled constantly and collected recipes from afar (my grandfather was a drama professor, so they had their summers) and touted the use of certain "convenience foods", she wrote in her farewell column in 1976: "Though the foreign dishes are always conversation pieces, vegetables picked from our farm's garden and cooked within minutes are the greatest favorites…That is real feasting." 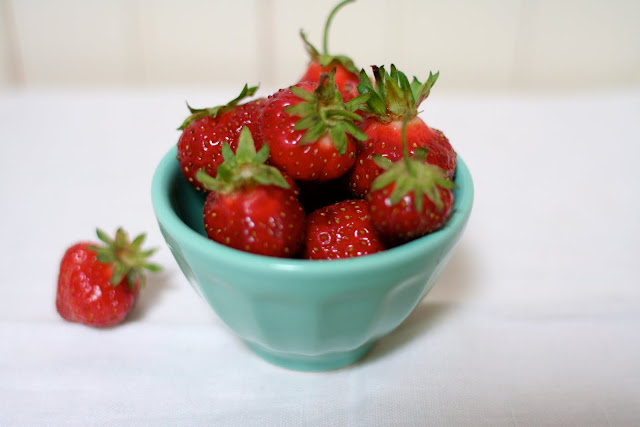 I remember the farm fondly from my earliest years, and I remember most the just-picked strawberries that stained my chin on late spring afternoons. So, as I ripped through cardboard and tape some 30 years later, I mentally willed there to be some really killer strawberry recipes in there; buckets have been coming in with our CSA, and they’re delicate, old-style fruits that fade by the minute. As luck would have it, the length of the box didn’t allow for the whole alphabet to be filed, and somehow “S” had gotten strewn across the top: a pile of papers origamied into angular packets. Apparently, these once jammed every drawer of Mimi’s home office, which I picture so clearly for its chaos as much as for her state-of-the-art electric typewriter–in the 70’s it must have been quite something. My sister and I never could resist sneaking in and test-driving it when she wasn’t looking. 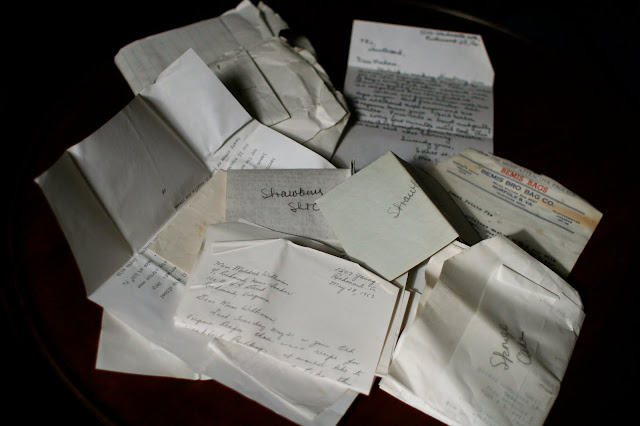 But the strawberry recipes I found, scrawled in various hands, weren’t my grandmother’s work at all. In fact, little in the box actually is. Mostly they are reader letters–and what an unexpected and delightful twist to find so many voices from the past crowded into that compact box, clamoring to get out. Until that moment, I hadn't really considered her relationship with her audience, nor the ongoing conversation she was kindling. These papers are a window into how correspondence used to work in a slower, politer time. 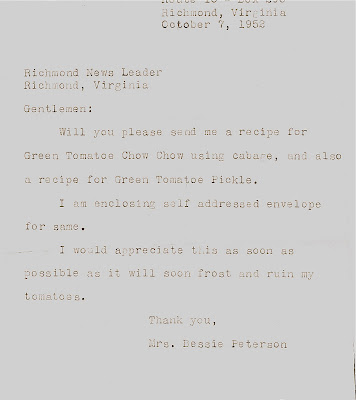 Mimi crowd-sourced to get to the authentically Virginian, sometimes country recipes. When she put out a call for strawberry shortcake recipes, letters poured in the snail way, from Richmond proper and more distant corners of Virginia. The recipes are well-worn, some reaching back into the 1800's, with measurements given as “a teacup” or baking temperature as “in a quick oven”. It takes some imagination and guesswork to cobble them back together, but I had to give it a go. One letter, a long, chatty one written in 1953, captured my attention over the others. The writer, G. Herrmann Zank, passes along his or her mother's recipe, supplying vivid detail of technique–but no actual measurements. His/her mother used pure lard in the unsweetened biscuit dough and baked the single huge biscuit in a pie pan, rather than cutting individual ones (which (s)he asserted were more "modern"). The truth of the matter is, the writer of this letter had me at lard. Even my rural-dwelling great-grandmother used Fluffo (a "golden" version of Crisco) as her go-to baking fat, and the revisionist in me wishes it had been something more quaint and natural. And it so happens I had lard on hand, left over from our winter pork CSA, so I jumped at the chance to use it. 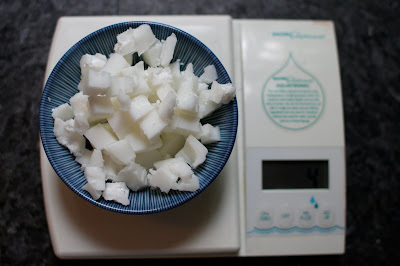 The biscuit came out light and wonderfully crisp, but I've decided I prefer lard in fall and winter preparations–those featuring apples, pears, or nuts–since to me lard has a heartier, faintly savory note. In the future, I'll reserve it for my fall desserts, just as I'll treasure this recipe for that fleeting space between spring and full summer, when strawberries are as sweet and tender as memories. 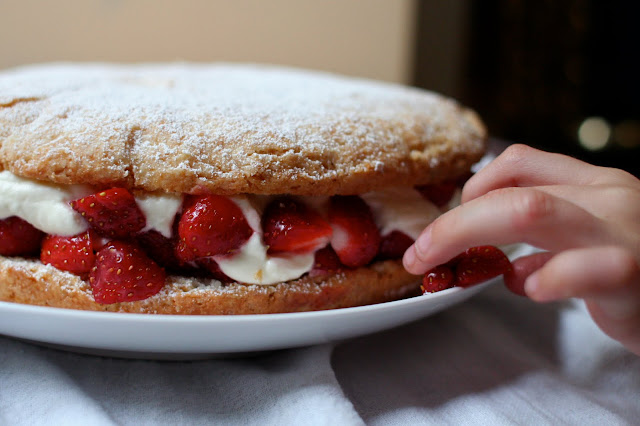 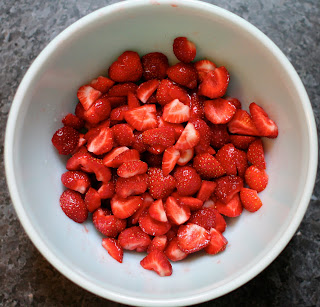 Instructions:
Preheat oven to 400 degrees and grease a 9" pie pan. In a large bowl mix together the flour, baking powder, and salt. Using a pastry cutter, your hands, or a food processor, work quickly to cut the butter or lard into the flour, until mixture resembles coarse sand. Do not overwork. Stir in milk until mixture comes together, then press into a ball and turn out onto a well-floured surface. Roll gently into an even disk, then transfer to the pie pan and press to evenly fill the pan. 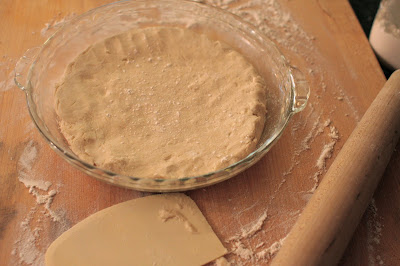 Put into the oven and bake 25-30 minutes (more, if needed), checking occasionally, until pale golden brown.

Meanwhile, sprinkle 1/8 cup sugar onto the cut strawberries and gently stir. Allow berries to macerate at room temperature while biscuit cooks. Whip cream with the other 1/8 cup sugar until it forms soft peaks.

Allow biscuit to cool, then carefully unmold onto a flat surface. Run a long, serrated knife through the equator of the biscuit to cut into two even halves. Put the bottom one on a plate. Using a slotted spoon, transfer strawberries onto biscuit half, distributing evenly (reserve liquid in bowl), then spread cream over berries. Lay the top half of biscuit over it all, then sprinkle with confectioner's sugar. You can use the delicious leftover strawberry juice to drizzle on the plate. 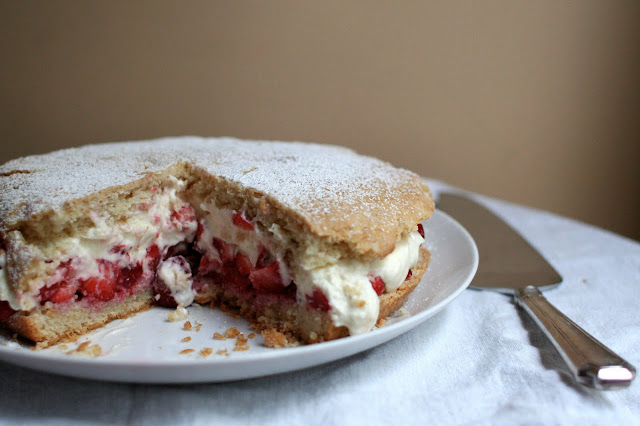