Truth be told, it was only a half, but still: a whopping 150 pounds of pig, and we broke it down in my friends Dan and Fran’s entry hall last Saturday, fueled by Negra Modelos and old tango. This butchering session was enlightening, entertaining, and at times absurd (and if this sort of pursuit is likely to offend you, you might want to click away before you get to the pictures below). Why, you might wonder, would anyone want to take part in such an activity, anyway? Well, why not? For the curious 11 food enthusiasts assembled, it was a rare chance to see where, exactly, the bacon and chops on our plates come from–and to learn a use for every last morsel, even the unsung cuts. You can call it an extension of the whole DIY thing which, in parts of the country including Brooklyn, is huge right now (backyard chickens! Basement breweries! Flash artisanal markets!)–and though dissed by critics as hipster hogwash, this craft movement seems a healthy backlash against industrial food, in this case factory-farmed meat. Dan, a whiz at the stove and the grill, hatched a plan to procure the half swine from the Meat Hook and host a workshop/party, where fellow epicureans would learn the art of butchering. Somehow, he convinced a real live butcheress, Sara Bigelow (also of the Meat Hook), to come to his house and show the group how it’s done, and after a string of e-mails peppered with pork puns, there we all were gathered around a dining table lined with cardboard and plastic tarp, a small electric fan whirring in the background. It was a surreal and, well, kind of a sketchy scene. Can you imagine walking into someone’s home and seeing a pig’s carcass all laid out, the head propped up and staring alongside it? Now imagine a ragged circle of onlookers, clad in a motley array of aprons, armed with saws and knives and bottles. There were some pretty earnest documentarians in the group, so if you care to see it in iphone time lapse, you can check that out here and catch the, er, darker version here. 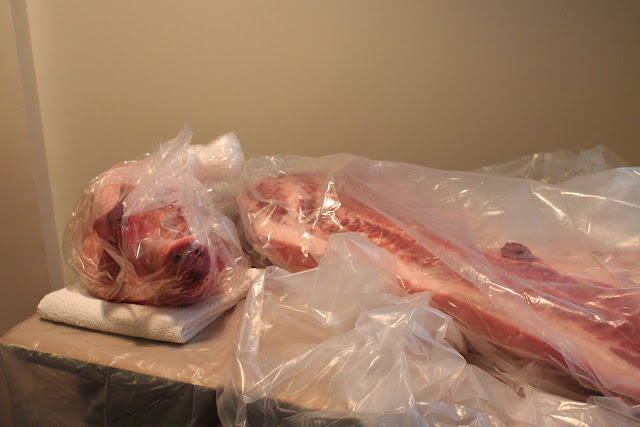 First, after the unveiling, we met the pig himself: this one came from upstate, from Sir William Berkshire farm (yes, a Berkshire pig), one of the suppliers for Fleisher's Meats. He was a happy hog, I like to think, rooting and rolling in loamy pastures and blissfully unaware of his fate. We learned to look for pigs without bruises or breaks, as either would indicate a stressful demise; this one seemed healthy and unblemished, aside from the obvious.

Next, Sara showed the tools of her trade, which she graciously shared with us. Her fearsome knives were holstered in a mean-looking metal and chain scabbard, which could kick the ass of the wimpy nylon knife bag I was issued in cooking school. 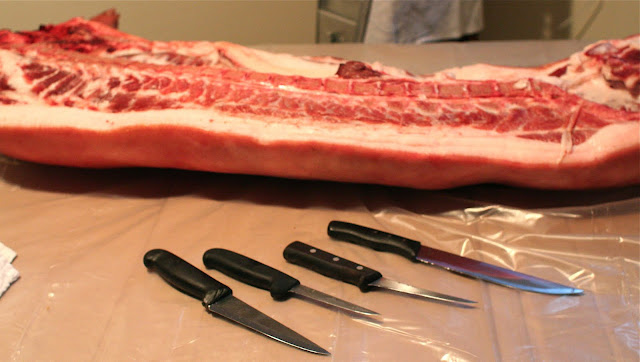 She then began orientation with the pig, starting with the kidney and surrounding sheet of leaf lard–the purest kind, excellent for baking; I later took this home and rendered it. 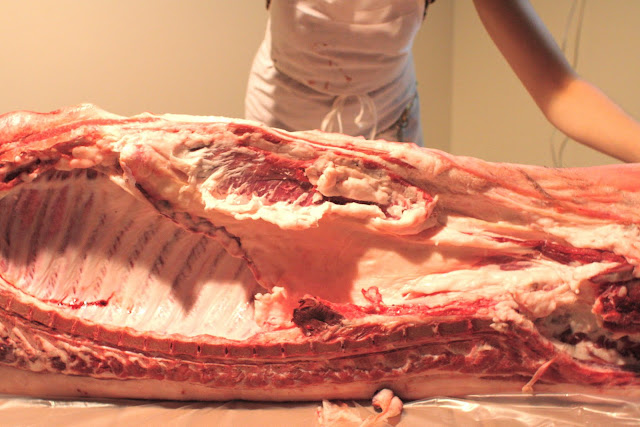 Everyone who wanted to, which was pretty much everyone there, had a hand at the saw or knives, as we broke down the pig first into primal cuts–like the ham and the loin–then into the more recognizable retail cuts you usually buy, such as sirloin and chops and spare ribs. It was humbling and disorienting, seeing this huge slab of flesh and bone and not knowing what was up and what was down, or where to find the familiar pieces. In cooking school we were shown our way around cryovacked primal cuts, and in restaurants, the meat guy usually handles everything. With decent markets these days and butchers like the Meat Hook, who can cut you just about any portion you like, you really don't ever need to lay eyes on a side of beef or half a hog at all.

Even though I watched it happen in real time, it still seemed like a bit of magic seeing a perfect chop, a hock, a sleek rack of ribs, emerge from the chaos.

The weirdest part was trying to find a place for all of that meat. A home refrigerator just wasn't designed to hold a half an animal, so we did the best we could, stuffing piggy bits into every refrigerator shelf, cooler, and bucket we could find, covering some in ice, marinating others for immediate cooking. We would have been shut down immediately by the health department, which fortunately doesn't care too much about what goes on in people's private kitchens and entry halls. Later, when the rest of the guests had arrived for the after party, I saw a few flip up the tops of coolers in search of beer, only to recoil at the sight of ziplocked bags of bones, skin, sausage scraps.
Was all of this the teensiest bit disturbing? I've gotten used to handling meat and cutting through bone, but I'll admit, I could have done without seeing the pig's lifeless head staring me down (my friend Maureen, similarly uncomfortable, politely arranged an ear to cover the eye). I do appreciate learning how to use all the parts, such as cheeks for guanciale and stray scraps for sausage; a lot of the fat–and there's a lot of it–gets thrown in for sausage, too. I volunteered to conquer my horror of the head and take on the job of simmering it into a rich stock. Ultimately I won't be going Zuckerberg any time soon, but I think it's good to face the beast and be more aware of what you're eating.
I’m sorry to say that, in the end, the pig’s head didn’t fare so well. When it was delivered to my house in a cooler the following Monday and we opened the lid, it was way beyond ripe; I sent it packing down Columbia Street. I'm not quite sure where that head ended up, and I don't think I want to know.But as for the rest of the beast, I would say it was put to excellent use, some of it enjoyed at the festivities that followed. During the workshop, one of the parts that elicited the most interest from the group was the shoulder. Pork shoulder is a beautiful thing, rippling with fat and dark, rich meat, and its awesomeness only multiplies when it’s cooked slowly, bathed in wood smoke. For many years over the fourth of July, we have dedicated a full day to the smoking of a Boston butt (which is actually not what it sounds like, but the shoulder). It's an all-day endeavor (stick around and plan to babysit!) that rewards with incredibly tender and flavorful meat which we shred and heap on a flimsy bun with some coleslaw and tangy, Carolina-style barbecue sauce. That's our tradition for Independence Day weekend, and here's the recipe:
Smoked Pulled Pork
Serves approx. 10 people 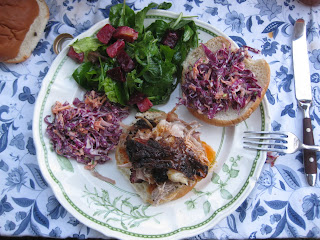 Ingredients:
Other implements:
Instructions:
Carolina-Style Vinegar Sauce
Ingredients:
Instructions: Starting the night before cooking begins, mix together all ingredients in a bottle or jar and shake well. Refrigerate and let infuse overnight. Just before using, strain mixture. For stronger flavor, do not strain. Reserve half of sauce for "mopping" meat and put the other half in a squeeze bottle for serving.
Posted by claiborne at 11:00 AM