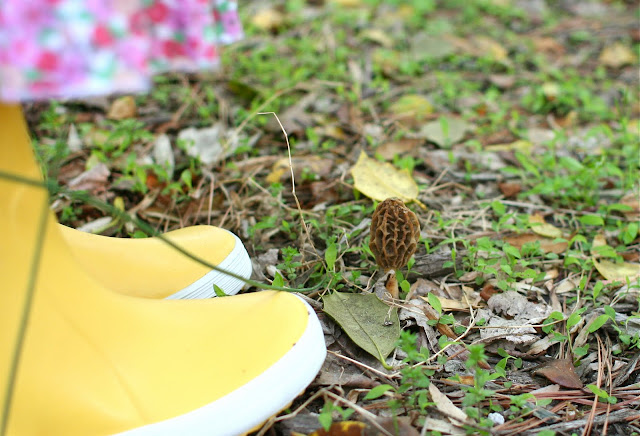 Let me start by saying that amateur mushroom hunting can be a nasty little game of foraging roulette–a gamble you don't want to lose. You really, really shouldn’t do it unless you have an expert along. Yes, there are ways to identify mushroom species with a degree of precision (by taking spore prints, for instance), but then there’s the matter of poisonous “evil twins,” which mimic their edible cousins, sometimes concealing themselves within an otherwise innocent fairy ring. Though I’ll enthusiastically pluck fiddleheads, nettles, wild onions and dandelions for the dinner table (and would dig ramps if I could find them), I stop at fungi. It’s just not worth the risk. There is, however, one exception I’ll make, and that is morel mushrooms. This may make no sense at all to you, since I have zero credentials as a mycologist, but morels are an exceptional bunch in that, to a practiced eye, they can be pretty much be identified by appearance alone. They have distinctive conical, honeycombed caps, which may range in color from platinum blond to yellow to black. Sometimes, they resemble pine-cones. Their closest deadly doubles, the false morels of the Gyromitra genus, bear them merely a passing resemblance–in other words, they're more like distant cousins than twins. To me, false morels look like melted, misshapen horror-show versions of the real thing, and I can't imagine being fooled or tempted by one. If there’s any doubt, though, slice the mushroom in half lengthwise: a true morel will have a hollow core from top to bottom, while a false morel’s cap is filled with fleshy or cottony stuff. This first flush of Spring is the time morel hunters dream of all year, and it coincides with other glorious things, like the unfurling of fiddleheads, the bursting of buds, the warming of soils. In some areas of the South, the season is already wrapping up right now, but in northern climes it’s just beginning. You can chart the fervor on message boards where morel maniacs share the vicinities, dates, and conditions of their finds with fellow aficionados–but will never reveal their "spots". The Midwest and Pacific Northwest are hotbeds of morel hunting activity. In the latter, carpets of black morels may sprout up following forest fires, drawing hundreds of hunters to a burn site. Michael Pollan wrote of this phenomenon in The Omnivore’s Dilemma. Morels are known to proliferate after good, soaking rains, and while there’s no guarantee where or when they will pop, they’re found throughout most of the U.S. from April through May, with outliers emerging in some places as early as March, reportedly as late as August. Morels also seem to have affinity for certain species of trees–so you're more likely to find them in certain forests than in others. Areas near poplar and ash trees, old apple orchards, dying elms, and some conifer forests all seem to encourage morel growth, but then the mushrooms may materialize almost everywhere, including in mulch piles, suburban lawns, and along railroad tracks.

My own experience with finding morels is limited to Virginia, around the second week in April, in a light poplar forest scattered with dogwoods and hollies. There are generally bloodroots growing nearby. But I won't tell you any more than that.

Last week, I got my five-year-old in on the game of "mushroom hunt." My children won't touch mushrooms of any kind–all because of the disturbing Story of Babar, in which Babar becomes king after the old ruler eats a poisonous mushroom, turns green, withers, and dies (this, after poor Babar's mother is shot by a hunter and he flees, takes up with a sugar mama, and then takes his cousin as a child bride). But my girl was happy to poke around the forest floor with a stick, and as further proof of the power of books, she insisted on wearing her daffodil-colored wellies, which she adores because "in books when it rains people always have on yellow boots or yellow raincoats." 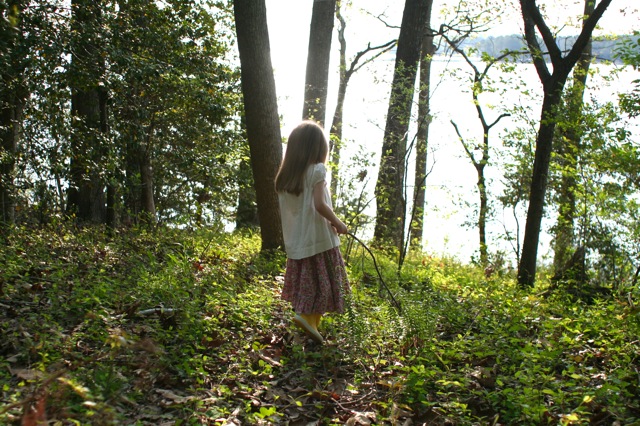 I'm always surprised we never find more than a few there, because if I were a morel that's where I would want to hide out: up on that enchanted hill enjoying views like this: 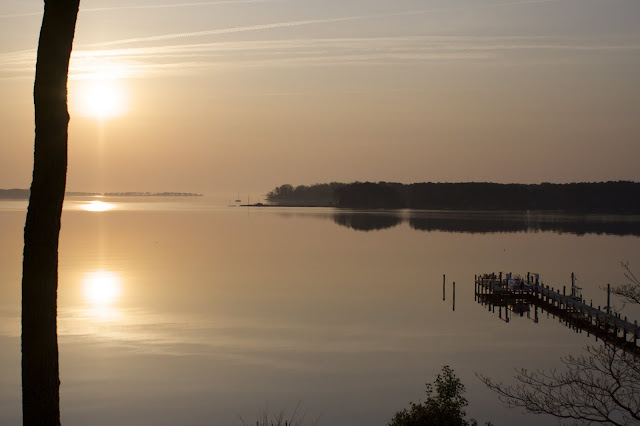 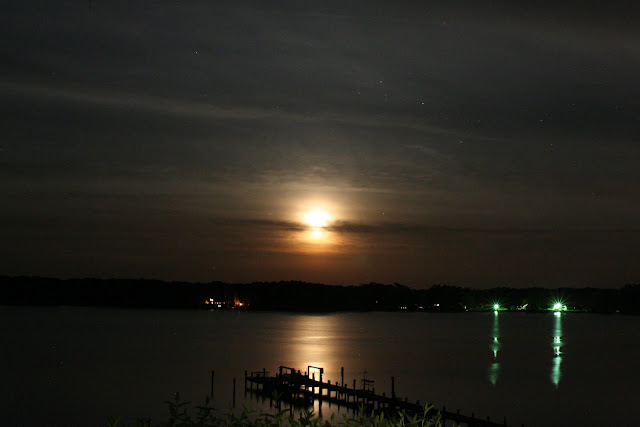 But you just never know. In fact a friend, whose name and address shall remain anonymous, e-mailed me a picture that same week: 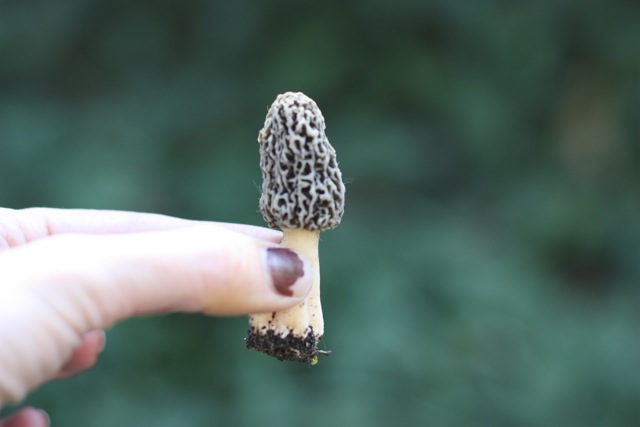 She found this specimen and some companions peeking out of the ivy in her Brooklyn backyard. She had been purging her borders of them nearly every spring for years, for fear the kids or dog might take a bite and poison themselves. 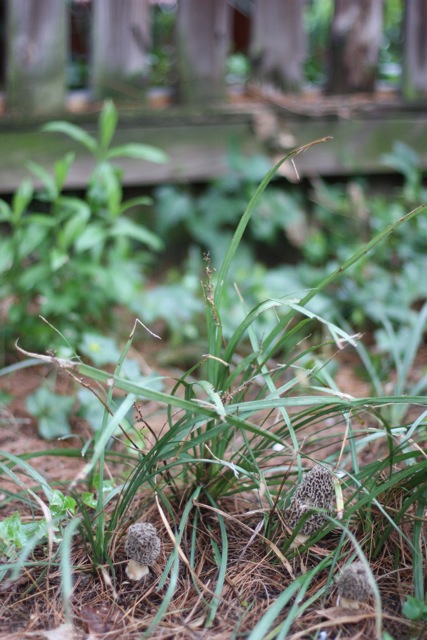 If you happen upon some morels this spring and decide to eat them–if not your own finds, then those that are sure to appear in finer food stores and farmers' markets–you should know how to treat them, for there's really nothing like a fresh morel. Earthy, nutty, and even somewhat meaty, they have a texture reminiscent of tripe, meaning all those little folds just provide more surface area for crisping and for holding onto sauces. 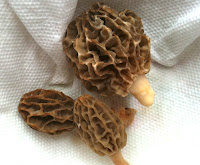 First, the matter of cleaning. Your 'shrooms may have soil or small bugs clinging to them, being that they are products of nature (all morels are wild–even those found in Brooklyn). I recommend brushing the soil off with a soft brush or clean cloth, and if they are especially gritty, you will have to resort to some water–something I almost never recommend for mushrooms, since they're essentially sponges. You can clean dirty morels by submerging them in a bowl of lukewarm water, swishing them carefully, then putting them on clean towels to dry. Use them fairly soon after cleaning so they don't turn soggy. For larger morels, first slice them in half lengthwise (top to bottom).


Always cook morels. Though not poisonous, they do contain a compound that can can irritate some people's stomachs, especially when consumed in quantity and with alcohol. Cooking takes care of this. The fresher the mushroom, the simpler the cooking should be–at least, that's my rule of thumb. At the most basic, a little butter and salt does the trick. Slice the morel in halves or quarters (depending on size–some giants may require more cutting). Choose a shallow skillet that won't crowd them, put the heat on medium high, throw some butter in and let it start to brown slightly before adding your morels–the butter will turn nutty and sweet (just don't burn it). Cook the morels for around 10 minutes, stirring, until they're still tender but crisp on the outside. If the morels release water, allow a few more minutes' cooking time for that liquid to evaporate. Sprinkle with salt to taste.


You can fold these sautéed morels into an omelet, or just put them on toast. You can also make a lovely pasta sauce by first sautéeing minced shallots in butter for a minute, then adding some chopped thyme leaves and the morels. Sauté as described above, then add a bit of vegetable or chicken stock, cook until reduced by half, and swirl in a generous measure of cream and/or creme fraiche at the end. Add salt and pepper at the very end to taste, and stir in a few spoonfuls of pasta cooking water to make it saucier if needed. You can scatter some chopped, fresh herbs on top, like parsley, chervil, and/or tarragon.


Morels taste heavenly tumbled in the pan with some of their vernal cohorts, like fiddleheads, asparagus, and ramps. If you happen to have access to all of these, well, then the gods of spring are clearly smiling upon you.