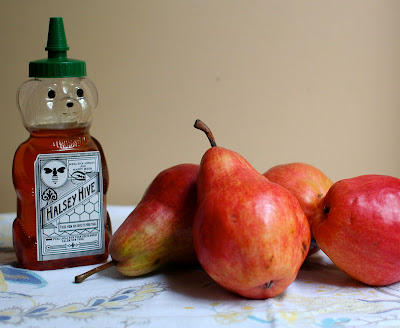 This time of November, on colorless days when a certain kind of wind whips a mist off the river and rips the leaves from the plane trees, I find myself swept back to a place very different from Brooklyn, New York. It could be the special cocktail of weather that does it, or maybe it’s the rootless feeling such gusts can conjure, but suddenly, for a second, I’m 23 again and in the Camargue. At the end of my post-college gap year (which was closer to two), my Mom flew over so we could take one last little trip together–and the month being November, we were celebrating our respective birthdays, even though neither one was of any consequence. I had been living in Paris, dodging real responsibility as a not-so-legal worker there, a cigar box my bank. Earlier fall had seen me kneeling in vineyards, picking grapes (and drinking) in Burgundy–the logical conclusion to a year pouring (and drinking) in a wine bar. Now it was time for me to head back to the States and start sculpting something of a grown-up existence out of my dissipated youth. My mother, upon landing, appraised my sparse collection of tired black t-shirts, gypsy skirts, and the inevitable array of scarves, sighed, and concluded: “I think we need to get you some decent clothes.” She whisked me off to buy my first interview suit and a presentable pair of heels, because soon I would be scraping together my resume and begging people in New York City to interview me. Beyond the trauma of staring at a pinstriped version of myself in a shop mirror, it was a cocoon-like pause in my life, a happy distraction from the reality of leaving a place I loved and leaping into the unknown. Truffle season had begun, and after a few decadent dinners in Paris and Lyon, my Mom and I set off for the Camargue, that marshy area at the bottom of France where the Rhone empties into the Mediterranean. It’s a wild little corner just south of Arles, untouched by the Côte d’Azur glitz, a world apart even from the quaint hill towns of Provence. The region is famous for its red rice, bulls, mosquitoes, and, further south, the salt flats where fleur de sel blooms and flamingoes fan out overhead. The horses are all white and the bulls all black. It’s desolate compared to the sunny, intimately-stacked villages nearby, but there’s stark beauty in the expanses of flat, scrubby grassland and windswept trees.
We stayed at the Mas de Peint, a dignified and comfortable farmhouse with a handful of rooms, owned by a family–the Bons–whose patriarch (now deceased) was a swashbuckling character with a bushy white moustache and black cowboy hat. A cattle rancher born and raised, he was always dressed the part, and impeccably. He and his wife, Lucille, were warm and charming hosts, treating us like long lost friends as we took our meals in their kitchen and delighted in whatever was on offer that evening; it was always delicious. And since the sky outside dripped and blustered for most of our trip, the kitchen was the place to be, as close to the stove as possible, huddled over a soupe de potiron (pumpkin soup), a daube of the region's flavorful beef, and always expertly prepared vegetables from their garden. The one night we ventured out in the gloom, we lost ourselves on the meandering roads but eventually, on a tiny back lane, found the table d'hôte we had been seeking–literally, a small table in someone's modest kitchen, where that someone and her daughter prepared and served the meal, and fawned over us to make sure we were happy. I'm pretty sure their dog was roaming the kitchen, too, which we didn't mind at all. If memory serves, that dog even brought us our check at the end of the dinner. We ate some of the freshest and most delicious whole-cooked fish I had ever tasted, a vegetable gratin, maybe, and a homey dessert–and for the first time I realized how transcendent very simple food can be.
The sun emerged a few times and we rode white horses through the marshlands, drove down to see the salt flats and flamingos, and got lost a few more times before it was all over. It restored me to see an unfamiliar landscape, to smell new air. I felt warm and coddled. And the good, wholesome food, all straight out of the region we were exploring, built me up for the next adventure. I don't remember any of the desserts, just that they were simple, with fresh fruits (I'm sure Mom has it all written down somewhere); it would have been the time for pears. This dessert may have nothing to do with the ones we sampled there, but it reminds me of something we would have, that combination of flavorful pears and honey, suspended in a delicate cake. The recipe is adapted from one in the lovely Ducasse: Flavors of France, which was written around the same time of our trip, and given to me for Christmas by my parents the following year. If you make this–and you should–try to find lavender honey…it will complete the feeling. Enjoy it as breakfast or dessert on a blustery day. 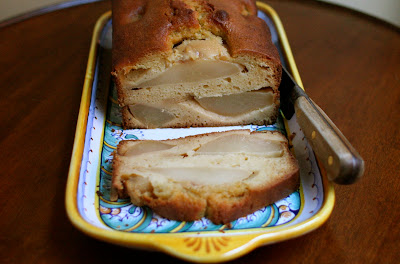 Pear and Honey Cake
Ingredients for cake batter:
For the pears
Instructions:
For cake batter:
In a large bowl, beat together the butter and confectioners' sugar until smooth. Beat in the baking powder and salt. Add the eggs one at a time, mixing well after each addition. Add the flour and mix thoroughly, until smooth. Cover the bowl and let rest at room temperature for an hour.
For the pears:
Preheat oven to 400º. Butter and flour a large loaf pan (9x5" or 10x5")
In a large skillet, melt half the butter over medium heat, and add half the pears. Cook for a few minutes, turning occasionally, until lightly caramelized on the outside. Add half the honey and turn to coat, then add half of liqueur. Cook for a couple more minutes, then transfer pears to a large bowl to cool. Repeat with remaining pears.
Once pears are cool, fold them gently into batter. Spoon pears and batter into prepared loaf pan and bake at the center of the oven for about 10 minutes, or until a crust forms on top. Using a sharp knife, cut a slash down the center of the cake. Lower oven temperature to 325º and continue baking for approx. another hour, or until a toothpick inserted in the center of the cake comes out clean.
Allow to cook for about 10 minutes before removing from pan, then cool on a rack or plate completely before cutting into it.
Posted by claiborne at 11:55 PM